Is rising stocks an accurate reflection of optimism in the market?

As of yesterday, the S&P 500 has managed to climb by a little over 33% since bottoming out on 23 March. That is quite remarkable considering the unprecedented times we live in and there hasn't been any majorly deep "correction" during this period.
In fact, when you look across all sectors as to what is driving the rally since 23 March, pretty much everything has been posting solid gains over the past two months:

See here for global coronavirus case data
The big question here is, how much of this optimism is reflective of the US/global economic recovery and the bullishness of investors towards corporate earnings?
Are investors pricing in a V-shaped recovery and a quick return to normal?
One can argue that after the epic plunge lower from late February to the end of March that there is position covering that is overdue, so that perhaps is also a factor to consider but let's try to look at the details to gauge this "optimism" a little bit more.
When you drill down to the year-to-date returns, here is what things look like:

The picture suddenly doesn't look that great, eh? But it was definitely not as bleak as it was many weeks back.
However, if you notice, the only heavyweight sectors that are doing relatively well are tech, consumer discretionary, and healthcare. Meanwhile, financials and industrials continue to sit all the way at the bottom of the pile.
In that lieu, let's drill down a little deeper: 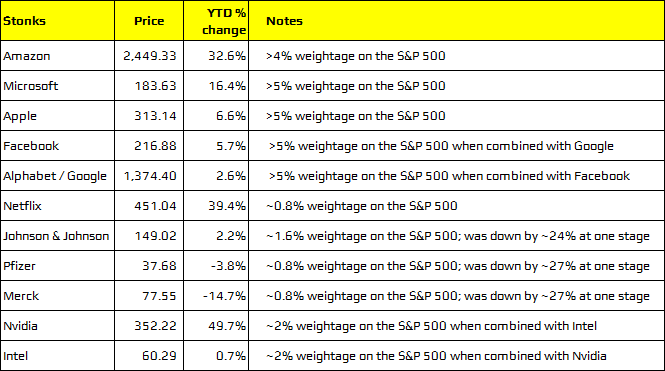 When you look at it now, the drive higher could arguably be attached to FAANG stocks and Microsoft - which account for nearly 20% weightage on the index - outperforming.
As convoluted as it sounds, these are the ones that are arguably less impacted by the whole coronavirus crisis. In fact, Amazon and Netflix can even be said to have benefited from the current predicament that the world is in.
Meanwhile, in the tech sector, you also get strong performers like Nvidia who also can be said to be one of those less impacted by the coronavirus crisis.
Over to the healthcare sector, pharmaceuticals are the ones that are faring well - you know, with the whole vaccine talk gathering pace - and that can be seen by the epic recovery by the likes of Johnson & Jonhson and Pfizer.
Zooming back out for a little bit, you can also argue that the Fed's policy measures have also largely helped to drive stock prices higher.
The unprecedented amount of liquidity injected into the system is to "blame" but it has definitely given investors a reason to 'get back into the game' over the past two months.
So, stocks being strong because the economy is doing well may not be right. However, the probable argument could be that stocks keeping stronger isn't a reflection of optimism but instead it is a "by-product" of what is making up the indices and the Fed's actions.
That brings us to the next train of thought. Can stocks still stay strong even as the economy struggles and optimism isn't quite there i.e. plenty of bears still around?
I'm not too sure what kind of world that would be. Eventually, you have to think that somebody has to be right here. The idea that most people have is that this is either all going to end up in flames or stocks are just going to continue to rip higher.
But these are weird and unprecedented times we are living in. It's going to be interesting to find out if this new normal will include asset bubbles during a time when the economy is drowning.