Is this a mania? A bubble?

A look at the evidence

If you read anything today, check out the latest from John Authers on speculative bubbles.
I think we're at the point where we all agree that we're in some kind of bubble, we just don't know exactly what it is or when it will end. The panic/euphoria measure from Citi is daunting. 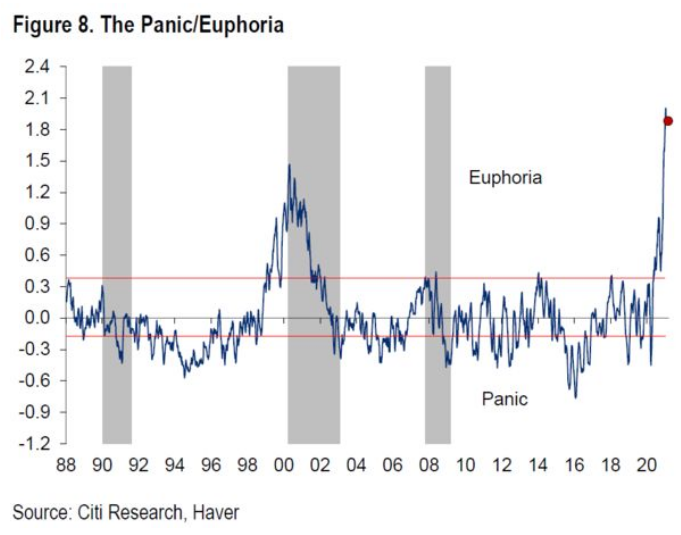 The most-telling part of it to me is this:

What exactly is a bubble, as opposed to an expensive market? Charles Kindleberger, in his classicManias, Panics, and Crashes, gave the necessary conditions: easy money, and an exciting narrative that will encourage people to invest. A bubble results when valuations become excessive, and investor behavior is dominated solely by attempts to sell to someone else for a higher price, rather than any rational assessment of value. This is what economist Hyman Minsky called the "Ponzi phase." At this point, the slightest interruption to easy money can bring the party to an end.

Cheap money is generally a pre-condition for a bubble and, according to Kindleberger, its removal is almost universally the catalyst for a collapse

It's tough for me to see this ending until the Fed changes gears. At the moment, that's on the distant horizon.
At the same time, while we're fretting about a bubble in shares of Gamestop, it's worth remembering that we're in the greatest bubble of all time: Bonds and $19 trillion in negative-yielding debt.