Kudlow: $40-$50 in Chinese agricultural purchases are over two years

It was framed as one year earlier

To put this into context. In 2017, China bought $24 billion in US agriculture. They're just going back to that.
This deal is looking sadder by the moment. Earlier today Lighthizer said purchases would increase by $32 billion to $40B and rising to $50 billion per year.
"On the ag purchases in the $40-$50 range, that's over a two year period," Kudlow said on CNBC, offering a different take.
The WSJ reports that the deal would have been larger if China would commit to numbers, but that they won't do that:

Chinese negotiators, led by Vice Premier Liu He, President Xi Jinping's point man on U.S. trade, balked at guaranteeing the purchases for fear that such managed trade could violate the rules of the World Trade Organization and cause friction between China and its other trading partners.
At Friday's briefing, Ning Jizhe, a top deputy of the National Development and Reform Commission, hewed to the position Beijing has maintained throughout the negotiations: "Expanding trade cooperation must be based on market principles and WTO rules."

The game within the game in these talks is the US trying to undermine the WTO. However China badly wants to uphold the WTO because it preserves its access to the rest of the world. 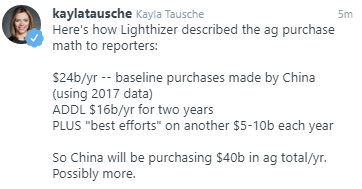