Lets say there is no persistent inflation. Then what?

What if central banks are dead right?

Maybe we're all getting swept away in a fake hype about inflation.
Yes, we all know there will be base effects from March-June but what if that fizzles and it's back to another era of 'serial disappointment' on inflation?
What if the Fed and other central banks are right? The market is being swept away by fear of rising rates today and that push and pull is going to be a theme all year.
Central bankers so far has been stringent that it's not going to happen. Here is a thread from former ECB Vice President Vitor Constancio that highlights the contrast in market talk and central bank thinking:

A potential problem is looming, and the media are pursuing a new story that builds on the following chain of reasoning:
Registered inflation this year is bound to be higher than present forecasts, resulting from one-off price spikes and base effects. That will not start a sustained high inflation process, but temporary higher inflation is possible.
For example, Euro Area inflation increased suddenly from several months at -0.3% to +0.9% in Jan. This jump resulted mostly from several base effects, especially the change to German VAT. Inflation expectations are increasing but higher in the US than in the euro area. 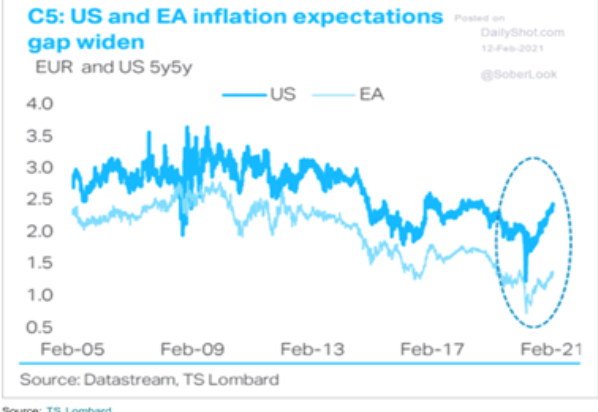 The major one-off base effect will come from oil prices that decreased abysmally in March 2020 and have recovered. Some estimates put US inflation in April reaching 4%! After vaccinations, later in the year, pent-up consumer demand will also increase prices. 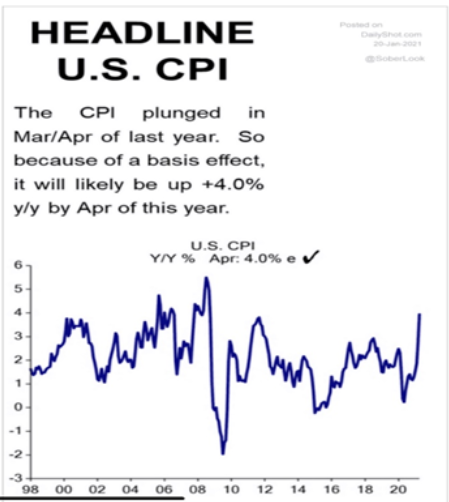 Despite the increased spending of accumulated savings, the savings rate will remain higher than before Covid for precautionary reasons (Fig 1). No permanent spending spree will materialise. Wages will remain subdued for a while (Fig 2). Higher but not high inflation is coming.

However, seeing a slight inflation increase, old hands will start to hyperventilate (wrongly) about high inflation, some even thinking about old monetarism (this monetarism would require another thread). They will increase pressure on Central Banks (CBs).
Temporary slightly higher inflation will increase bond yields, so investors must reduce or hedge duration. Higher yields tend to affect discount rates by more than the expectation of earnings-reaction to higher nominal growth & stock prices may suffer. (CBs shouldn't intervene).
CBs will not react to inflation going above 2% for a while. The FED already said it by adopting an average inflation targeting framework that allows for higher inflation offsetting the previous underperformance. The ECB & others will have to follow suit.
My 1st tweet media story would require that inflation goes PERSISTENTLY higher, e.g.>3%<4%, unlikely as it seems. But let´s assume that inflation obliges. Would CBs refrain from increasing policy rates? No. Would debt sustainability explode? It depends.
Inflation is associated with many things that the basic story ignores. Going up, it´s accompanied by higher nominal GDP level and growth. That helps to absorb old debt in a lower ratio to GDP. Overall outcomes depend on policies & nominal GDP growth vs nominal interest rate.
It´s well known that after WW II, higher growth and inflation contributed to the absorption of the war debt. True, a bit of financial repression also helped, but that doesn't imply unchanged interest rates. In many cases, there was no need for fiscal austerity.
The situation is different now. We cannot count on the real growth rates like the ones after WW II as we are still in a secular stagnation phase. But then this means that without sustained higher growth, persistently high inflation becomes more unlikely.

What he paints is a very market-friendly picture. It would mean the Fed and ECB can keep rates in the basement for another three years.
The 'old hands' who have freaked out about inflation for years have been dead wrong. Lets say they're wrong again.
So what would happen to asset prices in that scenario?
For starters, a US (if not international) housing boom looks inevitable to me and this would take it into overdrive. Some of that filters back into CPI/PCE but as Canada, Australian and New Zealand have show in the past decade, that doesn't necessarily mean higher rates.
For equities, it's a dream scenario: Cheap money without enough inflation to cause wage hikes is an incredible tailwind. If we can get through the spring/summer inflation bump and the Fed maintains the same messaging, I can envision a business investment boom and that reverberates through the economy and boosts productivity.
What's frightening about the scenario is that it's so tough to see any real losers, especially in the next 3 years. Even in a mild inflationary scenario beyond that, I don't think the Fed hiking to 1% materially changes the story.
Looking at the chart at the top of this page, I'm reminded that inflation ticked to 3.8% in the aftermath of the financial crisis only to fizzle for the rest of the decade. People were freaking out then and it amounted to nothing.
The stakes are enormous here because the $19 trillion in negative yielding debt in the bond market is the biggest bubble in history. I don't think the story will have a happy ending in the long term but the next 2-3 years could be glorious for asset prices.
Event today's price action is moderately encouraging. Treasury yields are up 7 bps at the long end and equities are brushing it off.
Invest in yourself. See our forex education hub.