OPEC meeting: a look at the outcomes

What's next after the OPEC cuts

On December 5, OPEC held its last meeting. Before that, the market was expecting to have a rather positive outlook from it. That was in part fueled by some confident commentaries from the cartel's Secretary-General Mohammed Barkindo.

He had shared some optimistic expectations seeing "brighter spots" in the oil industry for 2020 and in the OPEC's future in particular.

In turn, the latter was supported by the better picture in the US-China trade relations. These have stepped into a new stage of their trade talks in October, showing solid advancements towards an initial trade agreement. That supported the oil prices, which have been on the rise since then. In theory, these circumstances altogether should have given stronger grounds for the OPEC to finalize its meeting on a confident note.

Nevertheless, December 5 showed no such thing. More to that, the usual press conference that follows the OPEC meetings was canceled, leaving the audience with little facts to consider.

The only clarity that finally reached the media was that a deal was reached during the meeting. Also, a 500,000 barrels per day cut was reported later to take place in 2020.

Examination of the related analytics shows that the only solid conclusion from the meeting is that the OPEC inclines towards supporting the oil price in 2020 or at least setting a stop to its downward movement potential.

Why is it important?

The US has approximately 16% of the world crude oil production, while the OPEC countries have 30%. Apart from Russia, there are no other states which would be able to affect oil prices unilaterally manipulating the country crude oil supply.

That means that the OPEC, US, and Russia are those who define the present and the future of global oil production and prices.

That is why there has been so much debate about US shale oil production for the coming future - because the US shale as the main driver of American crude production boom is the prime competitor of OPEC and a cause of a grim outlook for it.

That is also why every step the OPEC takes is cross-checked with Russia to ensure the latter's support - because Russia is a strategic competitor of the US in the oil production sphere (same as for the OPEC, though).

In turn, oil is the prime fuel source and the basic industrial chemical component for the entire world. As such, its demand and supply affect the economies of every state. In addition, as a commodity, it is widely traded at the exchanges. Finally, the oil price affects the USD and other currencies, as it is traded mostly in USD.

What is happening to the oil price now?

Since April this year, the price for Brent crude oil has been generally dropping and came to the $57 per barrel low in October. That is when things started to look better, including the reconciliatory signals from the US-China trade war.

Therefore, the price started rising. On the daily chart, it trades at around $64 per barrel currently, which is where it decides if it intends to cross the August-to-October downtrend trajectory. In the same area, the price is testing the 200-day Moving Average, which is the main resistance for it at the moment. From the technical perspective, a decisive crossing of the 200-day MA would be a strong confirmation that the market is planning to keep rising. 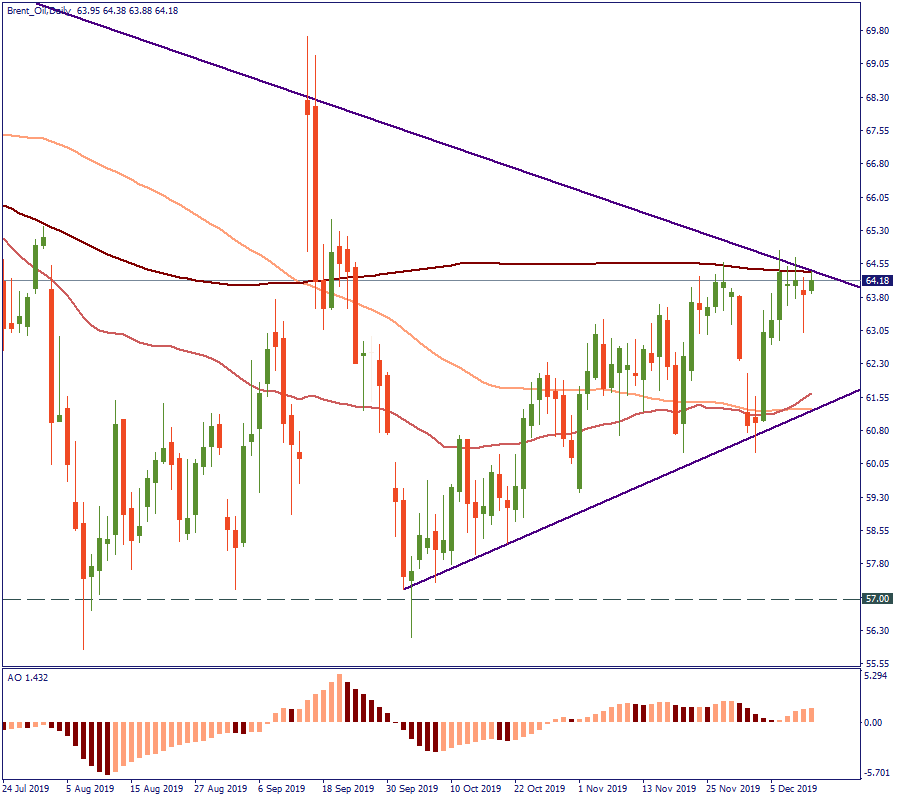