An anti-Troika, anti-austerity, anti-paying-its-debts party is on the way to an election victory in Europe.

The latest exit poll from ANT1 TV shows Syriza with around a 10-point lead as Greece votes for massive change. That exceeds the margin of victory in virtually every pre-election poll.

The latest shows Syriza with 36-38% of the popular vote. The currently-ruling New Democracy party hs 26-28%.

It’s looking very close to majority territory for Syriza. Because of the way parties with low vote totals are excluded and other quirks in the system, Syriza will earn 148-154 seats in the 300-seat Parliament. Whether they get 150 seats is the critical question at the moment. If so, talk of a Grexit will return as Syriza demands concessions on bailout terms. They are also due a 7 billion aid tranche that may be in jeopardy.

The market will also be closely watching for post-election comments from Greek leader Alex Tsipras to see whether or not he softens (or strengthens) his anti-troika rhetoric and how he plans to deal with his rivals.

The earliest forex trades in Asia-Pacific trading have the euro down 40 pips to 1.1166. The Australian and New Zealand dollars are also down around 40 pips. The yen is leading the way. 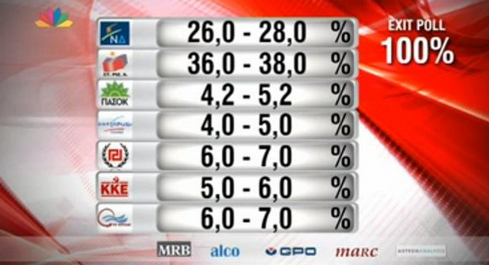 Syriza can get a majority with as little as 36% of the vote depending on how many parties enter parliament. If they get 38%, they’re virtually guaranteed 150 seats.