Preview: Why the August non-farm payrolls report is likely to surprise

A preview of the August non-farm payrolls report

The calendar turns to September on Friday and that means the month will kick off with August non-farm payrolls. The jobs report is always a major release and many are leaning towards a strong number after the private survey from ADP showed 237K jobs compared to 185K expected. At the time, that data sent the US dollar higher.

That might be the wrong reaction. Year after year the August non-farm payrolls report is a surprise and it's almost always in the same direction -- to the downside. 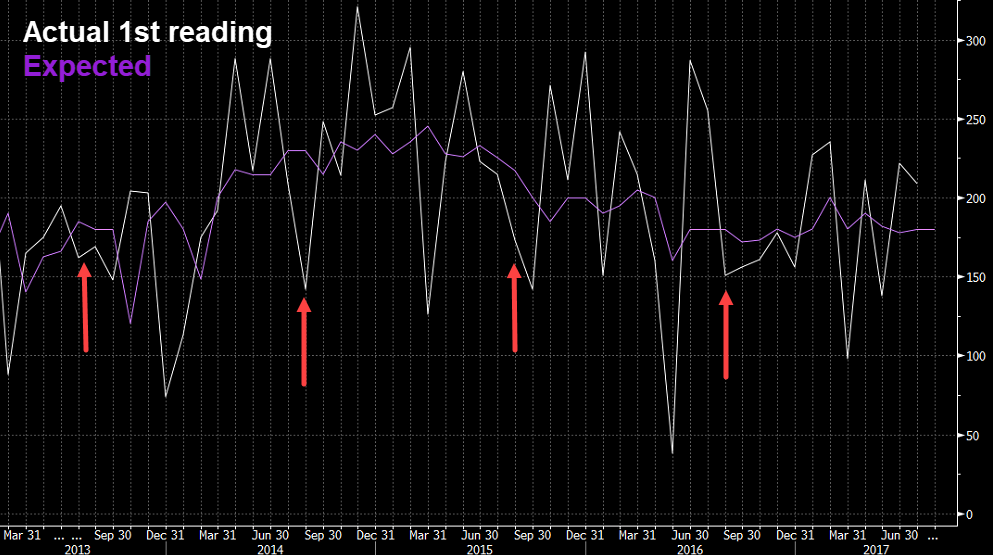 The Fed is watching closely for signals about when to hike interest rates next. The hurricane in Texas will cloud the pictures in the months ahead and the market already sees only a 29.8% chance of a rate rise.

That could fall if non-farm payrolls disappoint and it could drag down the US dollar with it.

The place to look for a preview is the history books. There is something about seasonal adjustments that makes August non-farm payrolls disappoint year after year. What's more, inflation numbers in the data tend to underwhelm.

In 16 of the past 20 years, August non-farm payrolls has been below the consensus. Last year, the consensus was 180K and the first reading was 150K, although it was later revised to 176K.

In the past six years, the average consensus estimate was 170K and the average reading has been 122K.

The reasons for the consistent misses are unclear. Things like teachers leaving and returning to school should be smoothed out by the Bureau of Labor Statistics in their seasonal adjustments but it's not an exact science. In addition, the heavy rate of holidays in the month with so many people now doing contract work could mean fewer people respond and somehow that skews the rate lower.

Aside from jobs growth, what the market has focused on most this year has been wage growth. That could also disappoint.

The reason is the reference period for non-farm payrolls is the calendar week that contains the 12th day of the month. August 12, 2017 fell on a Saturday, so they will use the week of Aug 6-12 as the reference. When the 12th falls later in the week, the numbers tend to disappoint, perhaps because many people are paid on the 15th, which isn't included in the survey.

The consensus is for a 0.2% rise in monthly average hourly earnings and a 2.6% y/y rise but the seasonals suggest something lower.

If non-farm payrolls is below the +180K consensus by the usual 48K miss and average hourly earnings miss by 0.1 pp or more, expect the US dollar to quickly give back the latest gains and stumble into September.