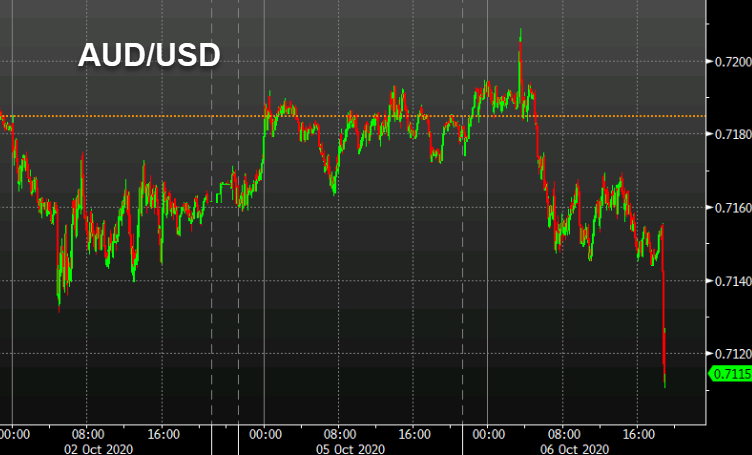 There will be no fresh stimulus for Americans ahead of election day.
President Trump announced that he's pulling the plug on stimulus talks until after the vote in a surprise move. Talks and signals had been constructive but it has been a tough trade to read.
The move raises the stake for the election and particularly for the hopes of a blue wave. There's little chance of Republicans winning the House so a Trump win would likely put us right back where we are now. A Democratic sweep of congress would result in a much bigger stimulus package but not until January, when the economy may have stalled out.
There's no word on possible one-off supports for devestated industries like aviation but I suspect that will come.
The damage has been quick:
Trump tweet:

Nancy Pelosi is asking for $2.4 Trillion Dollars to bailout poorly run, high crime, Democrat States, money that is in no way related to COVID-19. We made a very generous offer of $1.6 Trillion Dollars and, as usual, she is not negotiating in good faith. I am rejecting their request, and looking to the future of our Country. I have instructed my representatives to stop negotiating until after the election when, immediately after I win, we will pass a major Stimulus Bill that focuses on hardworking Americans and Small Business. I have asked Mitch McConnell not to delay, but to instead focus full time on approving my outstanding nominee to the United States Supreme Court, Amy Coney Barrett. Our Economy is doing very well. The Stock Market is at record levels, JOBS and unemployment also coming back in record numbers. We are leading the World in Economic Recovery, and THE BEST IS YET TO COME!

The stock market isn't at record levels. The S&P 500 is about 6% from the all-time highs.
For bank trade ideas, check out eFX Plus