All quiet in Baghdad

There are certain ways the market reacts to world events. For example, in times of increased uncertainty or a military conflict (as long as these have a global effect), Forex sees risk currencies get suppressed and lose value. That is because they get abandoned by investors favoring safe-haven assets in pessimistic scenarios. Coronavirus has proved it just now.

Same works with stocks, especially with oil production companies. The recent military standoff between the US and Iran pushed the oil price and the value of crude-related companies with facilities in the Middle East down (the effect was temporary because the conflict was quickly exhausted).

Generally, any significant tension on a global scale shakes the oil companies' stocks because investors doubt the future demand, the integrity of these companies, the safety of their facilities, etc. For the Middle East, that works even "harder": most global investors cannot have a clear picture of what's really happening there. Hence, they cannot really estimate the risk posed by the events taking place in that region. Therefore, naturally, they are prone to overreact to any "scary" announcement coming from the area. At least initially, while the "fog of war" is still clouding the true nature of events.

Consequently, most oil companies are subject to such an unpredictable market movement because the majority of biggest world crude producers do have their facilities in the Middle East. Hence, their shares see increased volatility whenever something happens around Fertile Crescent, Persian/Arabian (depends on your political affiliation) Gulf and Zagros mountains.

However, Saudi Aramco is something different.

Harun Al-Rashid would be surprised

Saudi Aramco is the one and only (roughly speaking) producer of crude oil by Saudi Arabia. Saudi Arabia contributes approximately 13% of global crude production, being second only to the US and going neck to neck with Russia. That means, Saudi Aramco is a first-echelon global entity. Hence, it is natural that its shares should be vulnerable to regional tensions, especially to those of the geostrategic scale.

Now, keeping in mind the Middle East has not seen a single peaceful century since the times of Harun Al-Rashid or maybe even Cyrus the Great (meaning, almost never), you would think that Saudi Aramco's stock price performance should look like a roller coaster -  forever. In theory, it should have started with that right away, given the fact that its IPO in December 2019 was followed almost immediately by the US-Iran one-week standoff over the killing of the Iranian military commander Soleimani in Iraq. However, in reality, nothing of such nature took place. Have a look. 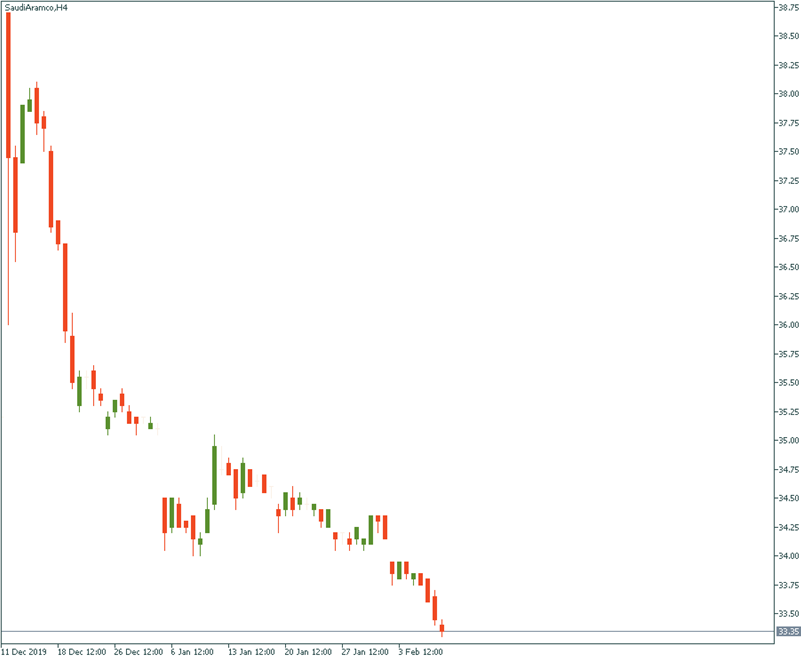 The initial price of the stock was at the level of 38SAR, then it gradually dropped to 33SAR. A 13% drop for a period which some observers believed to be a possible beginning of a war - not really impressive. Quite dull, in fact. It looks like a normal drop in the value of any stock after the IPO. Probably, if we didn't know that it is Saudi Aramco, traded in Tadawul (Saudi Arabian stock exchange), amid rocket launches being detected on a regular basis, we wouldn't be able to comment anything special on it.

So what are the reasons for such calmness?

First, Saudi Aramco is mostly owned by the Saudis - approximately 80% of the company stock belongs to the country nationals. As you can understand, these people are much more accustomed and much more informed about the reality of events in their country and their region. Therefore, while anywhere else in the developed world a rocket blast would produce an "Oh my God" reaction in masses and, hence, markets, in the Arabian Peninsula the gravity of such an event is perceived as "Another one? Where?".

Second, the number of Saudi stockholders of Saudi Aramco is roughly five million - that's about 1/7th of the country's population. Meaning, these people will panic and hence drop this stock only in case they see a threat to Saudi Arabia as a state, a threat to its general safety and integrity. Therefore, as long as Saudi Arabia stays alive, Saudi Aramco is likely to stay so as well. And is the country going to stay alive? Among all the tension and uncertainty in the Middle East? Most probably yes.

Why? Mostly, because they are backed up by their very rival in oil production - the US. You would say "but the US has now crude of its own, even Donald Trump said they no longer needed Middle-eastern crude, so they should have little interest in Saudi Arabia now". Is that so? Let's check.

Economically, indeed, the US indeed produces even more oil than Saudi Arabia. American crude makes about 18% of the global output, coming to approximately 15mln bpd. But does it quench the thirst for it in the US itself? No. The US needs at least 20mln bpd to meet its domestic demand. Meaning, 25% of the internal crude demand needs to be met by foreign imports. Where from? Canada - yes, but it gives less than half of what the US needs to import. What about the other half? OPEC.

OPEC is mainly Venezuela plus the Middle East. Now, Venezuela is gone: ideologically (Chavez's communist legacy of hatred against American "imperialism"), politically (the US supports the opposition leader and president Juan Guaido) and economically (the country is under strict sanctions by the US). It is the Middle East, then. And what is the Middle East now, from the oil exports point of view? Libya has cut its output by 80% recently under the command of General Haftar. So it's Iran, Iraq and Saudi Arabia.

With Iran, the situation is almost the same as with Venezuela, as the recent happenings showed. It's left for Iraq and Saudi Arabia then. Iraq is under firm American presence (hard to avoid a guess that this presence was in fact "invited" by the need to take control over oil more than introducing the light of democracy in the region). However, it is difficult to keep its political and economical integrity, because of Kurdistan, the Shiite part of the population under Iran's influence, etc. Saudi Arabia then.

Five major US military bases, strong political bond with the Royal Family (among others, both Presidents coming from the Bush family worked hard to solidify that bond), and prosperous economic relationship. Mostly, oil-related, of course. American investments are enjoying a heavy presence in the Saudi economy ("Saudi Aramco" stands for Saudi Arabian-American Oil company, as it used to be known initially), receiving local crude in return. No surprise, most of the American military bases are conveniently located in the areas of the major oil facilities in Riyadh (the central) and Dammam (the eastern part of the country). That makes sense: the most internally insecure zone of Saudi Arabia (border with Yemen, the southern part of the country) has no American military presence because it has no importance for the oil sector.

The conclusion is: you may assume Saudi Aramco's stock is almost a guaranteed risk-free investment opportunity. Unlikely it gives you a stunning gain (there are no trends of events foreseen in the future to promise that), but it is definitely more resilient to global worries than other oil companies. Hence, it may be an interesting item in your portfolio to rely on in times of uncertainties.

The views and ideas shared in this article are deemed reliable and based on the most up-to-date and trustworthy sources. However, the company does not take any responsibility for accuracy and completeness of the information, and the views expressed in the article may be subject to change without prior notice.
ForexLive