Perhaps the most important economics book written in the past decade is This Time is Different by Carmen Reinhart and Kenneth Rogoff.It might be wrong.

The authors studied hundreds of years of data on government defaults and showed that once debt crests 90-100% of GDP it permanently cripples growth. 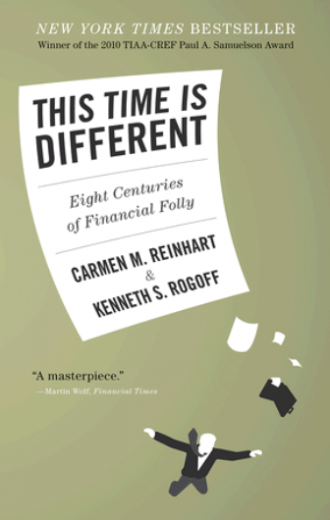 Now, their conclusions are under fire after a second look at their data shows a number of countries that bucked the trend were excluded. It’s being called a coding error on an Excel spreadsheet but that sounds extraordinarily unlikely.

This error is needed to get the results they published, and it would go a long way to explaining why it has been impossible for others to replicate these results. If this error turns out to be an actual mistake Reinhart-Rogoff made, well, all I can hope is that future historians note that one of the core empirical points providing the intellectual foundation for the global move to austerity in the early 2010s was based on someone accidentally not updating a row formula in Excel.

The counter-point will be that some of the countries they excluded were Australia, New Zealand and Canada in the period immediately after WWII. That’s obviously a special case because of the influx of young workers returning home — my memory is foggy but they may have even addressed this in the text.

Still, I can’t overemphasize how widely cited this book has been. If the criticism is true, I’m shocked it’s taken this long to uncover it.