Speculation gone wild or a new era in the stock market?

What makes us think that it can't be both at the same time?

GameStop shares are up by almost 100% in pre-market trading today and it has pretty much reigned in a supposedly new era in the stock market as we know it.
The manic moves in GameStop has pitted hedge funds against retail traders - r/wallstreebets in particular - and that is making for some interesting scenes this week.
Today, there's yet another stock joining that foray and that is AMC - which is now trading by over 130% higher in pre-market trading currently:

This is centering a lot of the debate around what is contributing to these outworldly moves in the stock market. Is it the Fed bringing rates down to zero? Is it the printing press going into overdrive and easy money is spreading everywhere?
Perhaps that might be part of it but at most, you can tie that all down to market sentiment and talk about how valuation doesn't matter anymore as the printing press continues to go BRRR. I would argue that it is less so about rates, although it does play a role.
An interesting argument by Tracy Alloway from Bloomberg today points out that the power of retail traders in this day and age is completely different from other speculative frenzies in the past - especially from the Dot Com bubble.
The key difference this time being that retail traders have much better access to financial options and that amplifies their ability to produce larger flows. 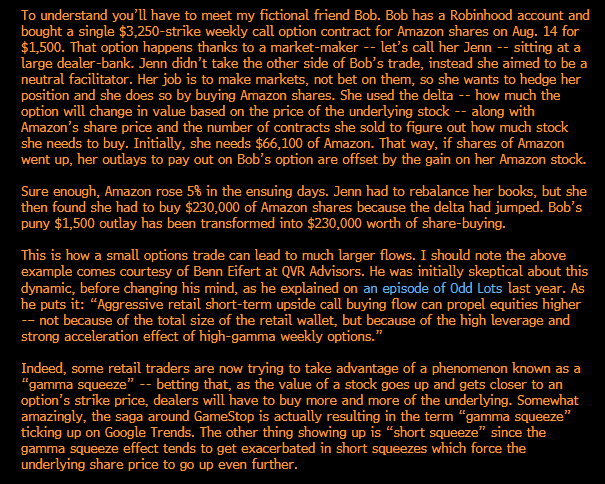 For bank trade ideas, check out eFX Plus
The rise of platform offerings such as Robinhood is arguably one of the more impactful factors to drive greed in the market - perhaps even more so than the Fed.
While there is certainly a case that what we are seeing with GameStop is nothing more than a speculation frenzy gone wild, it also perhaps is to do with a new era in the stock market - one that everyone hasn't quite gotten their head around just yet.
It is weird. It is messy. It maybe doesn't make sense. But perhaps, it doesn't have to.
One thing is for sure though. What is happening with GameStop now isn't the first of these stories and it won't be the last either.