The Hong Kong dollar is shrugging off the Chinese takeover

HKD remains near the top of its trading band

In 2018 and 2019, the USD/HKD was frequently up against the top end of its trading range at 7.85 but it fell to the lower bound of 7.75 as the virus hit China and has largely remained there, despite a small blip to the upside the past two days. 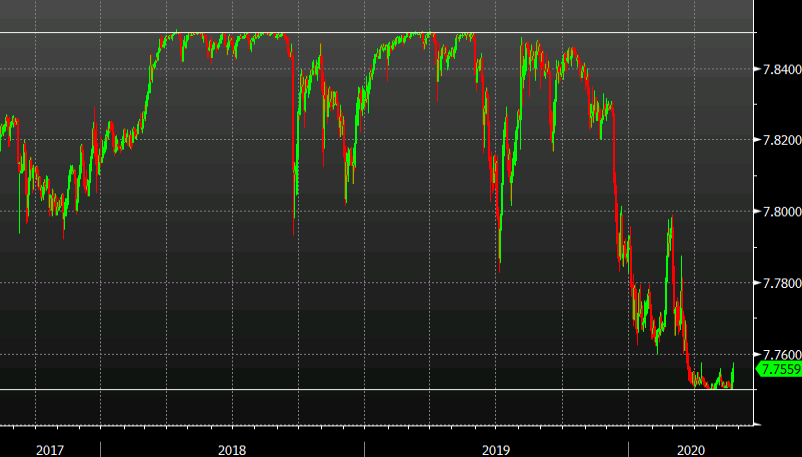 The reason is that while money is undoubtedly been fleeing Hong Kong, Chinese money coming into Hong Kong is a bigger factor at the moment. Importantly, Hong Kong short-term rates were also above the Fed for most of this year.  The Hong Kong base rate is now 0.50%.
In addition, the Hong Kong Monetary Authority has proven it can defend the peg and it has an astonishing amount of ammunition. In 2018-19 it spent only $16B of its $437B in reserves to defend the currency.
"I would expect there they're going to have serious capital flight problems in Hong Kong, if they follow through this, they will no longer be the financial center of Asia, and that they themselves will pay very, very heavy costs," said White House economic advisor Kevin Hassett today.
So far, there's no sign of that and you have to wonder if Beijing wouldn't happily prop up the HKD during any kind of transition in an effort to keep the peace.
Moreover, the sad reality is that stripping people of freedoms, stopping protests and installing Chinese police in Hong Kong isn't exactly bad for business.
See here for global coronavirus case data