Three explanations on why the euro has remained so strong

They ask, "why is EUR defying gravity?

1. Euro had become the favorite funding currency the world over with significant leverage being added in the past year. Given the move we've already seen, and the fact that higher vol lowers the risk adjusted return for your carry, risk aversion should lead to unwinding of these carry trades which require buying of EUR.

3. Many portfolio managers may have been significantly underweight euros for some time now. As the euro has depreciated and European fixed income has sold off materially, this would provide a good entry point to slowly start to reduce/ take profit on underweight positions." 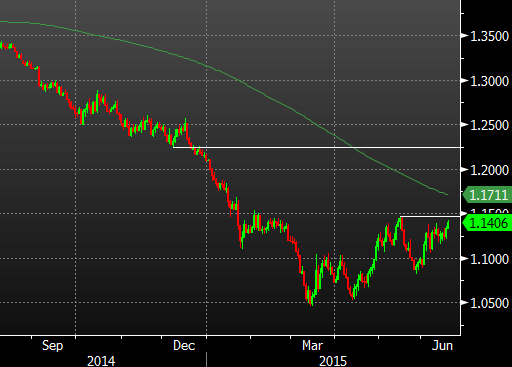 There have been a series of notes along these lines from banks and research firms and there's nothing close to a definitive answer. At some point, the chart tells the story and it's a story of resilience. We're now in the process of the fifth attempt to break above 1.14. Once the May high of 1.1467 breaks, there isn't much in the way of resistance until the 200-day moving average at 1.1705 and the pre-QE lows at 1.2246.

For euro trade recommendations from banks, check out eFX Plus.