Trump is up and tweeting on the day 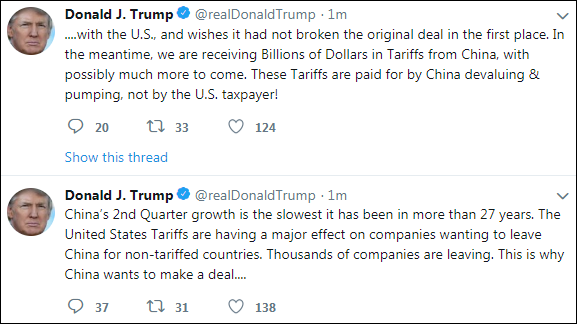 ForexLive
As mentioned earlier, currencies were more focused on the details of the Chinese June data - which showed industrial activity holding up a little better-than-expected - but overall Q2 GDP growth was at its weakest annual pace since Q1 1992.
Tariff-related or not, I'm not sure China is too desperate to strike a deal especially not when their red lines are not addressed. Egos are still at play so we haven't reached a breaking point on either side just yet to find a solution.
On a side note, he's also talking about "billions of dollars in tariffs from China, with possibly much more to come". That's certainly not the most positive of news if we're going to see trade tensions escalate any further.