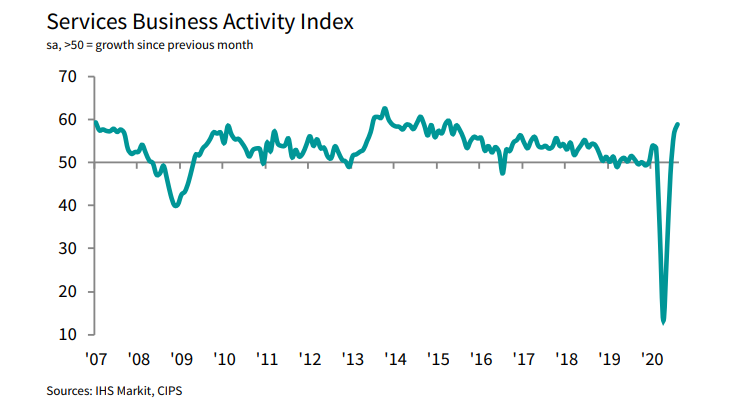 The preliminary release can be found here. The final readings reaffirm a less robust improvement in business activity in the UK in August, but at least demand conditions are still holding up for the time being.
However, job losses are seen accelerating and that is a real cause for concern especially with the government's furlough program set to run its course in October.
That may temper with the pace of the recovery and business conditions as we head into the latter stages of the year. Markit notes that:
For bank trade ideas, check out eFX Plus

"A further surge in service sector business activity in August adds to signs that the economy is enjoying a mini boom as business re-opens after the lockdowns, but the concern is that the rebound will fade as quickly as it appeared.

"The current expansion is built on something of a false reality, with the economy temporarily supported by measures including the furlough and Eat Out to Help Out schemes. These props are being removed.

"The burning question is how the economy will cope as these supports are withdrawn. Worryingly, many companies are already preparing for tougher times ahead, notably via further fierce job cutting, the rate of which re-accelerated in the service sector in August to a pace exceeding that seen at the height of the global financial crisis.

"Policymakers face a huge challenge in sustaining this recovery and avoiding a 'bounce and fade' scenario, especially if virus numbers escalate further, in which case we may be looking at a 'bounce and slump'."