The UK economy is edging toward a turning point, unless it has already turned

British Chancellor Norman Lamont famously spoke of the “green shoots” of economic recovery in October 1991.  At the time he was widely criticised for being out of touch with the electorate’s recessionary pain. But in hindsight, his comment was remarkably prescient.  GDP troughed in the fourth quarter of 1991 right at the time of his remark.

So Norman Lamont actually did an extraordinary thing.  He accurately predicted the inflection point of the economy at the time.  Doing so is notoriously difficult as the official data tends to lag the real economy and most commentary and analysis is still negative.  And yet the inflection point is a highly significant moment – it is the beginning of an increase in confidence in both companies and consumers that drives future growth.

Did Mervyn King signal this week that the UK economy was at a turning point?  For his last inflation report he made his most optimistic speech since the start of the crisis predicting a “modest and sustained recovery”.   He increased his GDP estimates, with the economy expected to grow 0.5% in the second quarter’ he also reduced his inflation forecasts.  He was “Saving the best for last” as one newspaper writer dubbed it, with his exit from office pending. 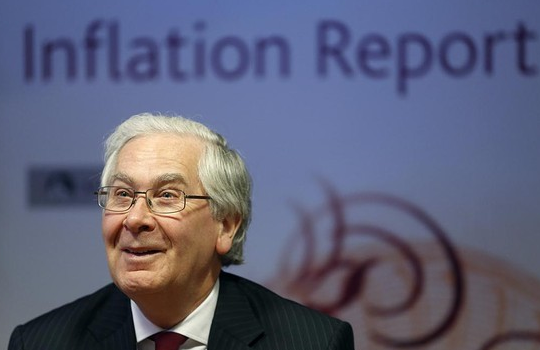 Apologies to Mervyn and his vast team analysing all the data, but I have a healthy distrust of economic forecasts.  Many years studying the theory of finance has taught me that economists, like many professional forecasters, significantly over estimate their own skills at predicting the future.   They tend to suffer from being both unskilled (inaccurate forecasting) and unaware (overly confident in their predictive powers).  I will note just one of the many papers on this.  By and large economists missed the credit bubble and have under estimated its effects since.  GDP forecasts have proved to be wildly over optimistic in the UK and Europe for many years. Thus I treat economic forecasts with much skepticism.

However history has much to teach us.  And I have gone back to Reinhart and Rogoff thorough analysis of past financial crises in the book “This Time Is Different” (an excellent if none-too-easy read).  To quote “recessions surrounding financial crises are unusually long compared to normal recessions which typically last less than a year”. The historical average peak to trough GDP for financial crises according to their work is a fall of 9.3% and a duration of 1.9 years.  However this financial crisis is global unlike all of the other post World War II crises.  And so, they argue, the better comparison for the current troubles is the Great Depression.

Reinhart and Rogoff’s analysis of the post 1929 period shows that the average peak to trough GDP was about 4.1 years (Figure 14.7 page 234).  Now the UK economy peaked at the beginning of 2008 and so May 2013 is just over four years past the peak.  Using Reinhart and Rogoff’s historical analysis, then  the trough of UK GDP will have just passed.  Of course, the 4.1 year figure should not be taken as exact as there are differences between countries, the policies pursued now are different to then etc. But it reminds us that crises (even global financial ones) are slowly overcome and the further  through it, the closer to the end we are.

Yet only a month ago, UK headlines were still screaming of a “triple dip” recession . First quarter GDP growth of 0.3% prevented that.  And, thanks to revisions to past data that tend to get little media coverage, the double dip may not even have occurred. The 2012 data – the double dip – was confused by the Queen’s Jubilee and the Olympics. But already that data has been revised upwards and the updated and minimal 0.1% contraction in the 4Q of 2011 and the 1Q of 2012 is likely to be revised up again. Result? No double dip….

So much of the initial estimate of GDP is guesswork and it is based on easily measurable industries, which be definition are the older ones.  The faster growing, but unmeasured “new economy” is invisible in a much economic analysis and data.  Recently I was sitting at a conference listening to a panel of big name middle aged economists but not one was on Twitter.  And yet there is a vibrant social media economy developing.  Tweetdeck was sold by its founder to Twitter for reportedly £25mn.  Wimbledon teenager Nick d’Aloisio sold Summly to Yahoo reportedly for $30mn.  That is a not insignificant wealth creation for an industry that much economic analysis ignores.

Clearly confidence is key to coming out of any slump and there are signs that British consumers are becoming more hopeful.  Anecdotally many Britons are choosing to spend their thousands of compensation for being mis-sold payment protection insurance (PPI). The UK’s most popular tabloid, the Sun, ran a piece this week on how its readers are spending their cash (kitchen, conservatory, wedding, Disneyland if you’re interested).

The Citizens Advice Bureau clearly is concerned that consumers are spending and not saving PPI cash as it has issued advice to use the windfall to repay debt.  And total PPI could provide a big boost to the economy.   The total amount banks expect to have to compensate victims could reach £16bn. One of the reasons given by the car industry for strong UK car sales is that consumers are using PPI cash to help them buy a new car. If Britons are so fearful of their future, why are they spending this windfall?  The PPI spending spree suggests their confidence is returning (as do strong results this week from electrical retailer Dixons and last week’s strong trading from travel group Tui).

A renewed and more vigorous British consumer may prompt companies to become more confident too.  Then the party can really get started.  They are the players at the table with money to spend.  Some economic vibrancy may prompt the cheque books to open.  And if that happens all at once, there could be a stampede to spend.

Economists always under estimate the fall in GDP in bad times and always underestimate the recovery. The consensus view is that the recovery in the UK will be sluggish.  There is always a risk to the consensus.  Maybe Mervyn is not optimistic enough – maybe the turning point is gone and the green shoots are already unfurling into leaves.