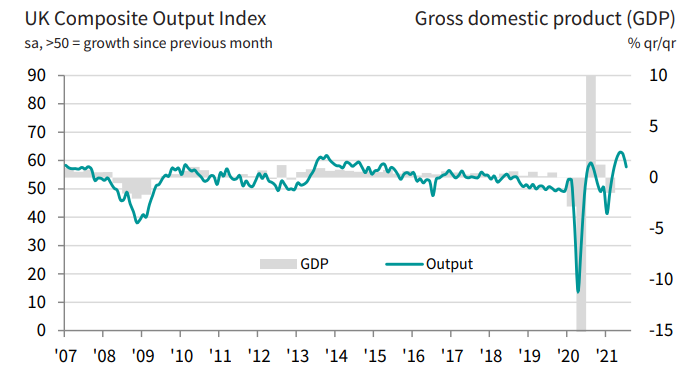 UK business activity miss on expectations and decline quite considerably from June as firms widely report that staff and raw materials shortages dampened conditions, hindering the recovery pace after the reopening in April.
This is certainly a spot to watch now for the UK and will likely dampen any hopes of a more hawkish tilt by the BOE as we look towards the August meeting.
Markit notes that:

"Although business activity continued to grow, aided by the easing of lockdown restrictions to the lowest since the pandemic began, the rate of expansion slowed sharply to the weakest since March.

"Transport, hospitality and other consumer-facing services companies were the hardest hit, though manufacturing also saw growth weaken markedly during the month.

"Although the July flash survey only covered three days of the full easing of covid restrictions, any imminent re-acceleration of growth in August looks unlikely due to a steep slowing in overall new order growth recorded during July.

"Concerns over the Delta variant have meanwhile overshadowed the passing of "freedom day", and were a key factor alongside Brexit and rising costs behind a sharp slide in business expectations for the year ahead, which slumped to the lowest since last October.

"The PMI indicates that GDP growth will likely have slowed in the third quarter, after having rebounded sharply in the second quarter.

"Firms' costs rose at a rate unprecedented in over 20 years of survey history as supply shortages pushed up the price of goods, suppliers of services hiked prices and employee pay continued to rise."