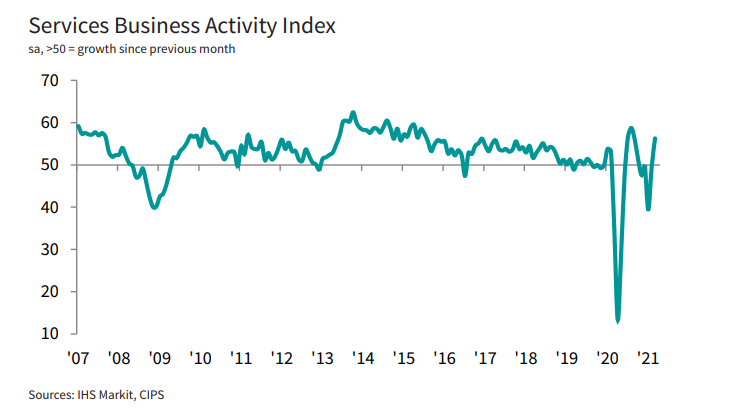 The preliminary report can be found here. Minor downward revisions as the final readings just reaffirm a modest rebound in overall activity in March as output and incoming new work saw strong increases last month.
Business expectations for the year ahead was the strongest since December 2006 in anticipation of the continued success in the vaccine rollout. Markit notes that:
Invest in yourself. See our forex education hub.

"UK service providers were back in expansion mode in March as confidence in the roadmap for easing lockdown restrictions provided a strong uplift to new orders. Total business activity increased at the fastest rate since August 2020 and this return to growth ended a four-month sequence of decline.

"Forward bookings for consumer services and rising optimism about recovery prospects resulted in extra staff hiring across the service economy for the first time since the start of the pandemic. Business optimism improved for the fifth month running in March and was the highest since December 2006.

"Around two-thirds of the survey panel forecast an increase in output during the year ahead, which reflected signs of pent up demand and a boost to growth projections from the successful UK vaccine rollout. Of the small minority citing downbeat expectations in March, this was often linked to uncertainty about international travel restrictions.

"There were further signs that strong cost pressures have spilled over from manufacturers to the service economy, especially for imported items. Higher prices paid for raw materials, alongside rising transport costs and utility bills, meant that operating expenses across the service sector increased at the strongest rate since June 2018."