For some reason, the idea that somehow hedge fund knew about the Brexit result before anyone else is doing the government rounds. In their secret world, they paid for polls that showed completely different results from the dozens of polls that were done before the vote.

The thing is, the exit polling data showed the same thing as the public polls. YouGov's exit poll had it at 52-48 for Remain. 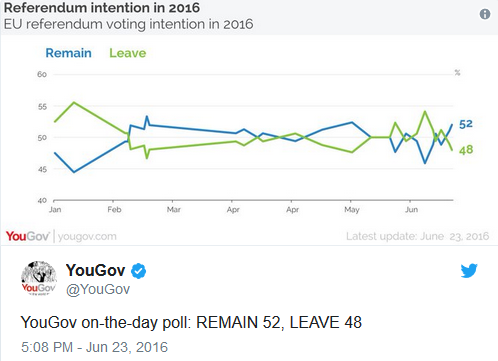 In the tinfoil hat world, this poll was used as a cover to push up GBP, with help from a supposedly phony Farange concession (he was in on it), that was then used to make millions, if not billions.

It's a joke because everyone heard the results of the hedge fund exit polls and they showed the same things as the real polls.

Even if they didn't, so what? If a hedge fund wants to do private polls and trade on them, who is that hurting? No one in a market has the right to every bit of information and if you're trading around an event like a referendum where all polls have been close, then you know the risks.

This is one more issue where the government should stay out.