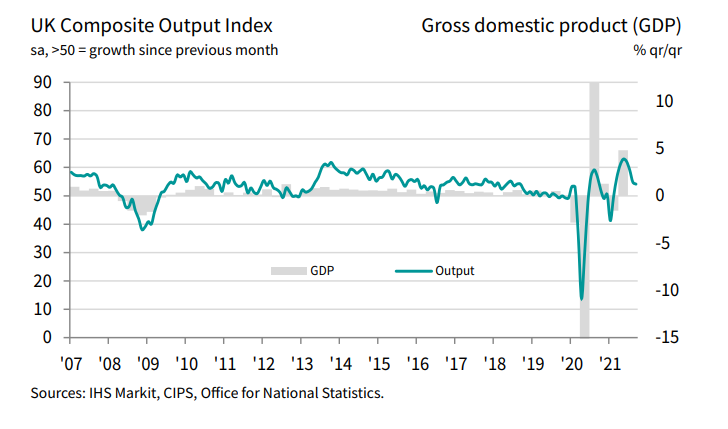 The readings show a further moderation in UK economic activity, with manufacturing in particular a drag amid supply bottlenecks - similar to the readings in Europe earlier. All three main headlines are the lowest in seven months. Markit notes that:

"The September PMI data will add to worries that the UK economy is heading towards a bout of 'stagflation', with growth continuing to trend lower while prices surge ever higher.

"While there are clear signs that demand is cooling since peaking in the second quarter, the survey also points to business activity being increasingly constrained by shortages of materials and labour, most notably in the manufacturing sector but also in some services firms. A lack of staff and components were especially widely cited as causing falls in output within the food, drink and vehicle manufacturing sectors.

"Shortages are meanwhile driving up prices at unprecedented rates as firms pass on higher supplier charges and increases in staff pay. Brexit was often cited as having exacerbated global pandemic-related supply and labour market constraints, as well as often being blamed on lost export sales.

"Business expectations for the year ahead are meanwhile down to their lowest since January, with concerns over both supply and demand amid the ongoing pandemic casting a shadow over prospects for the economy as we move into the autumn."