Up to 250,000 people are expected to descend on a small town in South Dakota. VROOM....VROOM 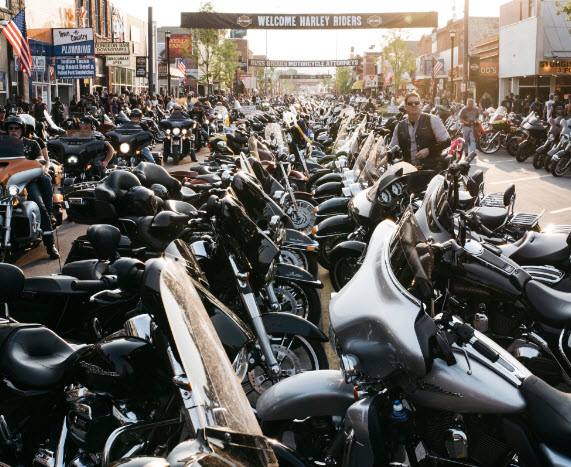 Ready or not here they come...
The roar along the highways heading north toward South Dakota are motorcycles that will transcend on the small town of Sturgis, South Dakota (pop. 7000).  It is estimated that they could see crowds of 250,000 people for the 10 day rally which will begin on Friday. If the numbers pan out it would likely be the largest public gathering since the pandemic began.
City officials are having 2nd thoughts about not canceling the event. According to polls 60% of the residents favored postponing the event.   The city has cut back on advertising and canceled city sponsored events including the opening ceremony.
The governor Kristi Noem (R), encourage people to attend the rally during an interview on Fox news citing the Fourth of July celebration at Mount Rushmore as proof that the state can't successfully host large events.  She added that the state's economy benefits with people visit.
Now most of the activities are outside and along the roads around the picturesque town. However, I kind of expect that there is a lot of drinking beer and eating as well in confined areas. There is also a long list of concerts on the schedule (see the official website HERE and concert schedule HERE).
The problem with such an event is the bikers all come from around the US and Canada and returned back to their states. That spread could lead to the "gift that keeps on giving" in the respective hometowns. As a result South Dakota may survive, they may get their economic boom from the visitors, but the damage may be spread out across the US.
CLICK HERE
For bank trade ideas, check out eFX Plus