Keep an eye on shale

The shale boom is quietly busting.
Within the energy market there is an increasing acceptance that the tide is going out on shale. Today shares of shale star companies like Occidental and Diamondback Energy crumbled to long-term lows.
OXY hit the lowest since 2009 while Diamondback (FANG) has traced out a textbook head-and-shoulders pattern as it broke to the lowest since 2016. It fell to $77 from $90 today in its largest ever percentage decline after warning it will miss production forecasts next year despite plans to spend about the same amount of money on drilling. 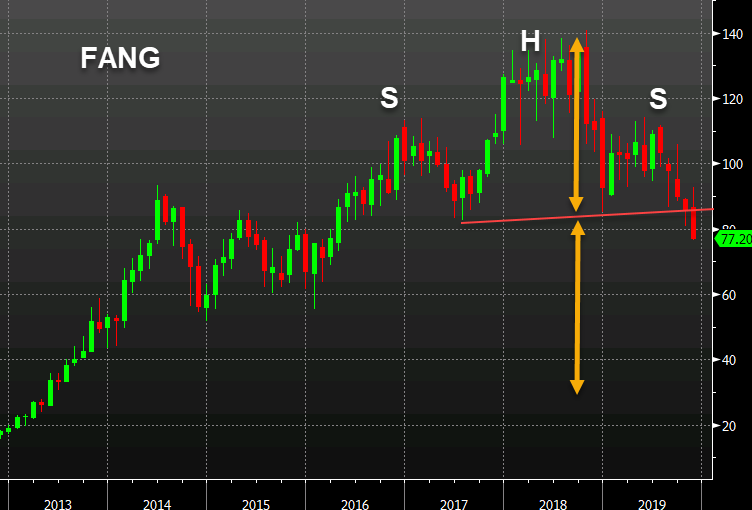 Earlier this year, forecasters were pushing a narrative that the US was going to hit 15-17 million barrels per day of production in 2-3 years.
Today shale pioneer Chesapeake Energy warned that it might be headed to bankruptcy.
Now, the script is flipping. Forecasts of hitting 13mbpd in Q4 are quietly being abandoned. The latest numbers have production at 12.6 mbpd with a modest rise coming. Next year, Goldman Sachs cut its production growth estimate to 0.7mbpd from 1.0 mbpd.

Today, in his quarterly conference call, Continental Resources CEO Mark Papa had this to say:

Now I'll provide a few thoughts regarding the old macro picture and relate them to Centennial's strategy. At a September Investor Conference, I predicted that 2020 total U.S. year-over-year oil growth would be 700,000 barrels per day, which at that time was considerably below consensus.
Given additional data, I now think that 2020 year-over-year oil growth will be roughly 400,000 barrels per day, which is below current consensus. Per the EIA 914s, U.S. production has been essentially flat for nine out of the past 10 consecutive months and it's likely to slightly decline over the next six months. Most people will describe the low U.S. growth to capital discipline, but I think that the larger reason is what I've been talking about for several years. The shift to Tier 2 and 3 drilling locations in all shale plays and increasing parent-child issues in the Permian. I'll also note that this is likely not just a 2020 event. I believe U.S. shale production on a year-over-year gross basis will be considerably less powerful in 2021 in later years than most people currently expect. I'll leave it to others to opine on what this means for global oil markets.

Pioneer Natural Resources Chief Executive Scott Sheffield had a similar take on Tuesday, saying he expects the Permian Basin, the top U.S. shale field, to "slow down significantly over the next several years... "I don't think OPEC has to worry that much more about U.S. shale growth long term."

What's critical here is that expectations of US supply growth has crimped global investment in oil. Meanwhile, demand keeps rising.
If shale busts or even flatlines, it's going to push crude prices far above current levels.
Sheffield said he was "becoming more optimistic that we're probably at the bottom end of the cycle" in oil prices.
This is a theme I've written about before and it continues to gain traction.
If it unfolds, expect some big inflows into CAD, NOK and other oil exporters as investment goes back into traditional crude sources.