Canada was the suspect but Venezuela the culprit 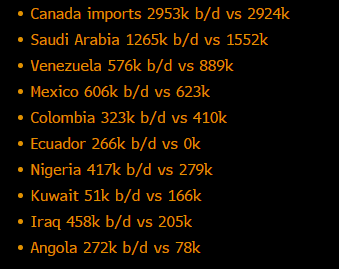 The big, surprise drop in US oil inventories last week lit a spark underneath oil prices. WTI shot up $1.60 on the headlines, hitting $45.60 per barrel.

The kneejerk reaction (from me included) was to point at Canadian wildfires as a culprit but that's not the case. The data is from Friday as Canadian pipelines only closed on Thursday as the fire hit.

Instead, it was a 35% drop in Venezuelan imports behind the miss. They fell to 576K bpd compared 889K the week before. If the prior week's pace would have held, that would have meant another 2.2 million barrels of oil into the US, eating up a significant part of the miss.

Why did Venezuelan exports fall so hard? I don't know.

But the takeaway here is that the drop in Canadian production is likely to hit next week and lead to another bullish inventory drawdown.