The irony of chasing companies out of China

The law of unintended consequences is on display in Vietnam.
The US trade war is predicated on the idea that China manipulated its currency to gain an economic advantage and hollow-out the US manufacturing sector. In fighting back, the US is encouraging companies to leave China.
However they're not going back to the US, instead they're heading to Vietnam and similar locals.
The problem is that Vietnam is doing everything today that China was 15 years ago -- namely keeping its currency down and generating a huge trade surplus.
The US Treasury is overdue to release its currency manipulation report but it's likely being delayed as part of US-China trade negotiations. China was labeled a currency manipulator in August. The thing is, if China has been doing any manipulation in the past two years, it's to keep the currency strong.
One spot to watch is Vietnam. As Brad Setzer shows, its trade surplus with the US is exploding: 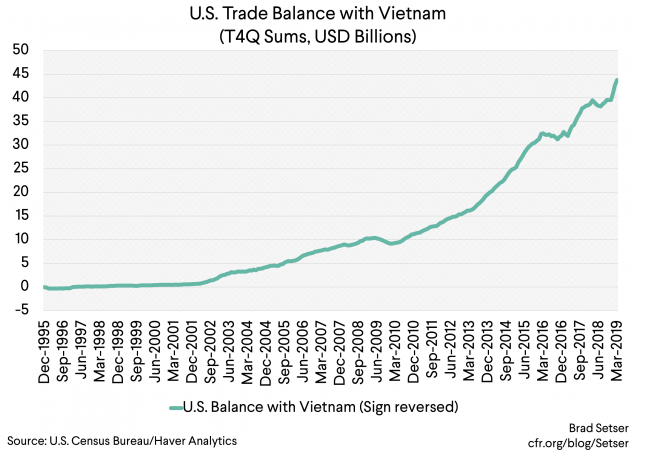 At the same time, it's almost surely holding down its currency. FX reserves have grown to $55 billion from $15 billion in 2012.
Setzer writes more about the manipulation report here.