What events will determine market sentiment in December?

A look at the key events in the market this month

The year is ending but Brexit and trade wars continue being the hottest topics. In this article, we will consider events that will determine the market sentiment of the last month of the year.

Unexpectedly, the British pound managed to gain momentum. Currently, the GBP has been appreciating against the US dollar and the euro. However, all eyes are on the Parliamentary Elections that will become the crucial barometer of the future pound's strength.

General Elections will take place on December 12. If Johnson's party takes the majority, it will be the most market-positive outcome. Why? Mr. Johnson will get a chance to pass the Brexit deal through the Parliament to get the next month's deadline. If the Conservative party succeeds, the British pound will continue its rally.
Will the BOE meeting affect the GBP?
The members of the monetary policy committee will present their interest rate's votes on December 19. The market hasn't seen any changes since September 2018. Nevertheless, this time analysts predict the increase of votes for the rate cut. If the elections outcome is positive for the domestic currency, the rise of votes for the cut will not affect the GBP. In the case of the negative elections result, the currency will lose its momentum and the vote may add additional pressure.
Technical picture

On the weekly chart of EUR/GBP, the pair has been trading on lows of April 2017. It's not a surprise that indicators signal a soon reversal as the pair is oversold. We may see a short-term correction soon. In that case, the pair should stick above 0.8495, rising towards 0.8655. If the Parliamentary elections are market-positive, the pair will keep suffering. Supports are placed at 0.8346, 0.8094. If the pound loses momentum, look at resistance levels at 0.8655, 0.8958-0.9050. 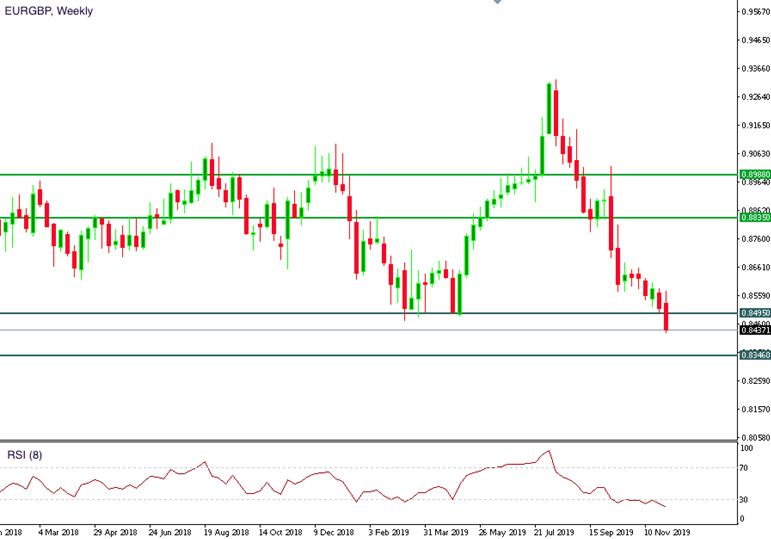 The GBP managed to strengthen against the USD as well. Up to now, the GBP/USD pair has reached the 6-month high. Again, indicators warn about the reversal with RSI reaching the overbought area. A correction may take place before the crucial elections. In that case, the pair may move to 1.2787 after touching the resistance range of 1.3170-1.3300. If the GBP is boosted by the elections, the pair will target the range and the level of 1.3573. If moving down, supports are located at 1.2787, 1.2512, and 1.2143. 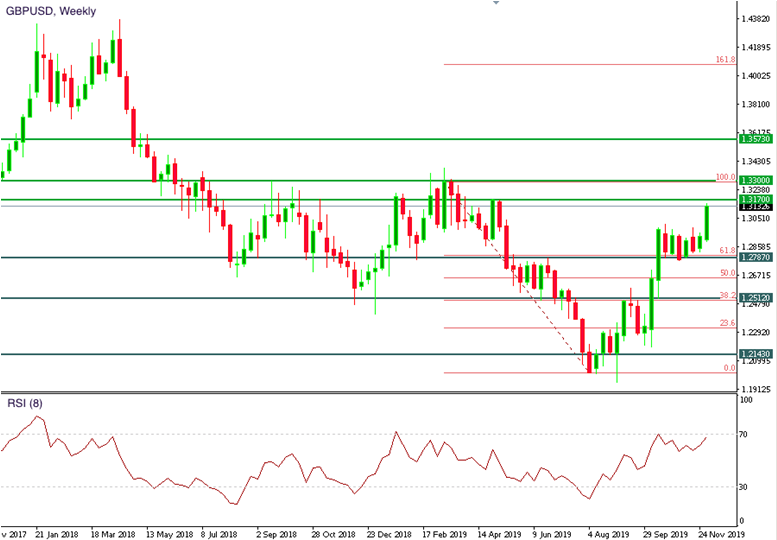 Although, the victory of the Conservative party is highly anticipated, traders are cautious about the further direction of the highly volatile British currency. The GBP is anticipated to be a risky asset during the week ahead of the elections.
ForexLive
Tariffs, Federal Reserve, and the weakening USD
The American dollar started December with a significant fall. Trump's tariffs don't encourage the domestic currency. After Donald Trump announced the US would impose new tariffs on steel and aluminium from Argentina and Brazil and proposed a 100% tariff on goods from France over the digital tax, the American dollar plunged.
Jobs data and Federal funds rate

Non-farm payrolls, average hourly earnings and unemployment rate figures will be released on December 6. According to forecasts, the jobs data are supposed to boost the American currency. The unemployment rate has been sticking to 50-year lows, NFP should show an increase of employed people, while average hourly earnings will reflect the rise in the price businesses pay for labor. However, the effect of the data is expected to be limited.

What about the Federal Reserve? Analysts predict the Fed to keep the rate on hold on December 11. However, the mood of the authority will be the indicator of the market sentiment. Previously, the central bank declared it considers letting inflation run above target. Such a measure will prevent it from additional rate cuts. At the same time, it may be a point of longer low rates. If the Federal Reserve sounds pessimistic, warning additional easing actions, the USD will continue decreasing. If there are any hints on the positive economic outlook, the American currency will have a chance to recover.
Technical picture

Let's consider the direction of the USD/JPY pair, one of the most sensitive pair to the market sentiment. The Japanese yen is considered as a safe-haven currency, while the American dollar lost this title. That means traders can rely on the risk sentiment of the market to forecast market moves. 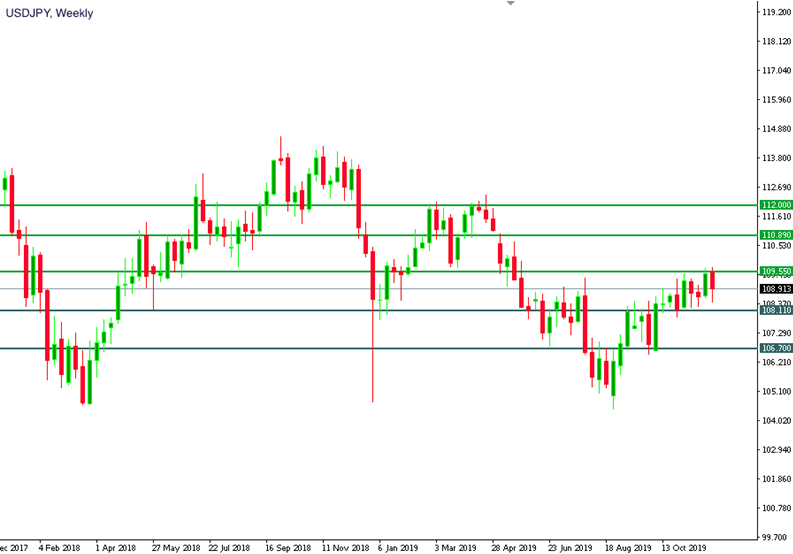 No positive sign for the euro
Christine Lagarde replaced Mario Draghi but she is expected to stick to the existing position. The ECB will announce the main refinancing rate on December 12. There is no possibility to change the current monetary approach as the outlook for the Eurozone remains tilted firmly to the downside with the inflation level staying under the 2% target. The ECB is more likely to present a bearish outlook. Fiscal stimulus is anticipated to stay a core point of the monetary policy summary. The only risk is a more dovish tone of the European central bank.
Technical picture

On the weekly chart of EUR/USD, the pair has been trading in the downward channel. If the dollar is boosted by the economic data or a relief in the trade tensions, the pair will slide further down. Support is located at 1.0925. A break below will provoke a plunge to 1.0577. The weakness of the USD will give a chance to the euro. Resistances are at 1.1170, and 1.1384-1.1470. 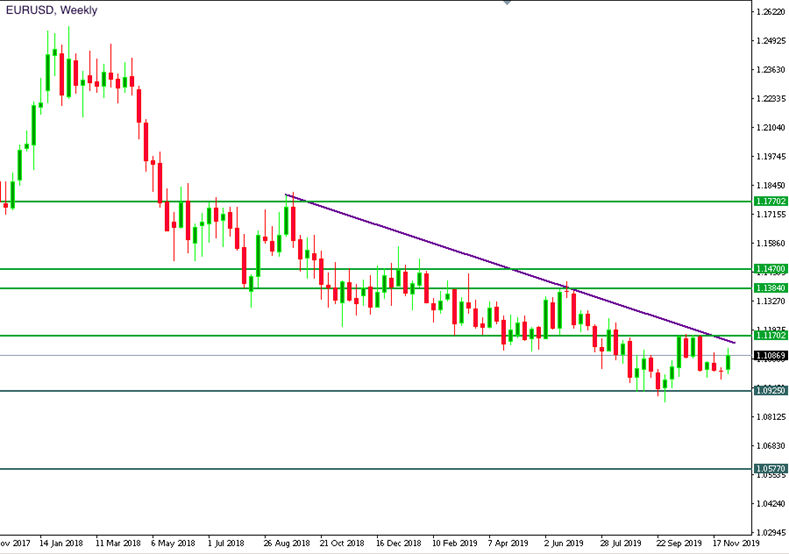 Making a conclusion, we can highlight that the market sentiment will be the main barometer of the market moves in December. Traders should take into consideration such events as Brexit and trade issues, paying additional attention to the central bank meetings.