There's no agreement on what is really driving the commodity market

Lively debate on what is driving the market

China is the elephant in every commodity trading room. It's a consumer of huge amounts of commodities, including about half of global copper.
Due to the nature of its economy and commands from the Communist Party, buying can be lumpy due to inventory builds or exhaustion. That's why this chart is doing the rounds: 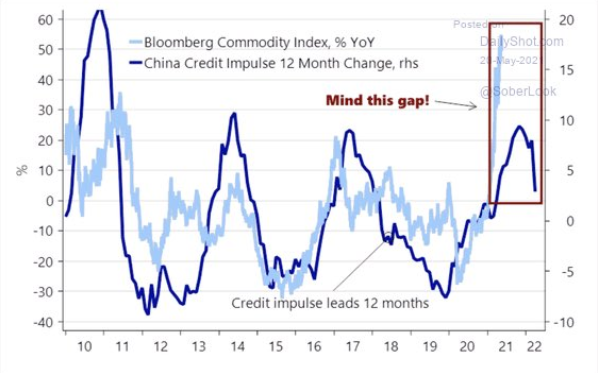 That doesn't look good for commodities and just today China was encouraging speculators to close out bullish bets on commodities. It was a instruction they appeared to follow for locally-traded commodities including iron ore and coal.
In the last 20 years, it hasn't been a good idea to bet against China on commodities.
But Goldman Sachs says now is an exception. Jeff Currie, who has been banging the drum on commodities for months, said that China's efforts won't work this time because reopening demand globally is dictating prices, not the CCP. He said the latest dip on Chinese curbs is a "clear buying opportunity" in copper, soybeans and other raw materials.
He made a good point about China's efforts to go after speculators:

"When commentators are unable to understand what is driving such a paradigm shift in prices, they attribute it to speculators - a common pattern throughout history, which has never solved fundamental tightness."