Where do we stand now on the Brexit equation? 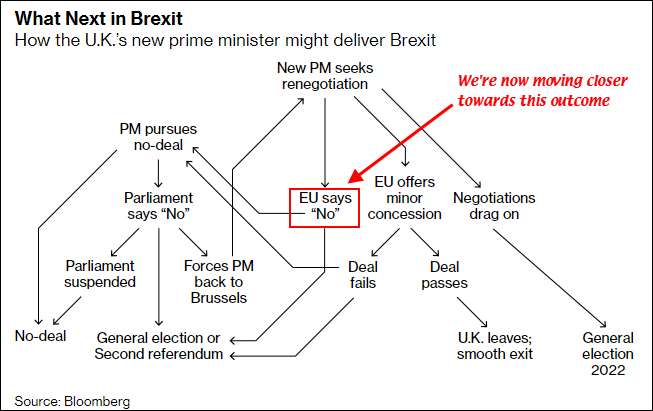 ForexLive
The latest development in the Brexit saga is that Boris Johnson and Jeremy Hunt both declared the Irish backstop "dead" and said that they will not include it in any negotiations with the European Union once either of them takes the helm.
With European leaders/lawmakers insisting that they will not offer any more concessions or renegotiate the current deal on the table, that puts us in a firm "No" position on the renegotiation branch above and that increases the odds of us heading towards a no-deal Brexit outcome on 31 October.
That could be in part what is weighing on the pound this morning as traders are coming to terms that whoever the new prime minister will be, any deal with the European Union looks to be farther away than before.
And as long as Johnson or Hunt continue to pledge their hard stance on Brexit, it's hard to see the pound gather any sustainable reprieve in the coming weeks/months.