Draghi basically says "we have nothing to say to you today, ask us again in June" 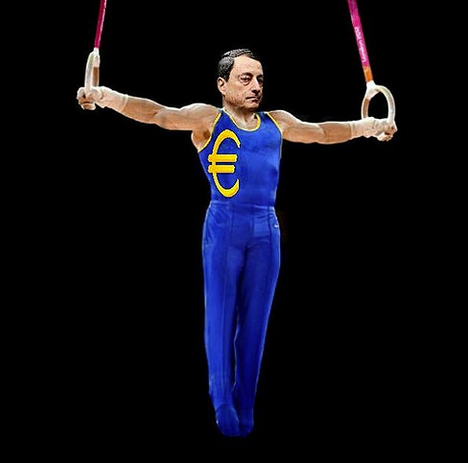 It was a tough balancing act for ECB president Draghi yesterday, but I'd say he managed it quite well. I highlighted the three key areas to look out for prior the speech here, so let's see how he fared and why the euro sank thereafter.
1. Economic data
As expected, he brushed this off providing a handful of reasons - more than I can count or remember - blaming it on global factors, weather, Easter and what not, saying that it is likely to be temporary. And that growth continues to be solid and broad-based. Pretty much within the lines of what'd you expect as he needs to set up a change in guidance during June.
2. The euro
There weren't much questions on the single currency after Draghi said that FX volatility has lessened, so it wasn't discussed in the meeting. That gave a little jolt in the euro as EUR/USD broke 1.2200 after the comment. But the fact that Draghi chose to keep mum about it means the market didn't have much to go on, even if it could mean that the ECB is a little bit more comfortable with recent developments in the euro.
3. Inflation
As mentioned, this was the key message to watch out for. On this front, Draghi kind of provided a more neutral message. He said that the ECB remains confident in inflation converging with its target, but underlying inflation remains subdued. And that things should move in a gradual pace. Euro bulls were probably hoping for something more, but in truth this was just about as good as it could get as Draghi surely is fearful of igniting a euro rally.
If there's one thing to summarise the meeting, it's as Draghi said: "Steady hand".
Although the market didn't took too kindly on the fact that they didn't even discuss plans for a June meeting saying that they have to monitor recent developments further before getting there. That creates an element of uncertainty.
While Draghi's "steady hand" message isn't enough to warrant the euro to weaken too much in my view, the element of uncertainty is one that could come back to haunt him. If Eurozone economic data continues its soft patch into June, will they change their mind about tweaking forward guidance and ending QE?
I guess we'll have to wait and see.