Your guide to the US-China trade war

All eyes on 15 December

December 15 is an important deadline: on this date, the US authorities scheduled to impose the new tariffs on Chinese goods. That is a major reason for the remaining global economic tension. Below, we will examine why it is so, what the consequences for the global market are and how you can turn that in your favor in your trade activities.

Why US-China relations are important for everyone?

Two elephants in the room

The global Gross Domestic Product as of 2018 may be divided into two parts: 40% is the contribution of the US and China with 25% and 15% respectively, and 60% for the rest of the world.

That means, almost half of the globe's output is the combined result of the US and China.

Next, China is enjoying one of the highest GDP growth ratesin the world: the map below shows the countries with higher than 6% economic growth in red, while those with less than 2% are marked in green. 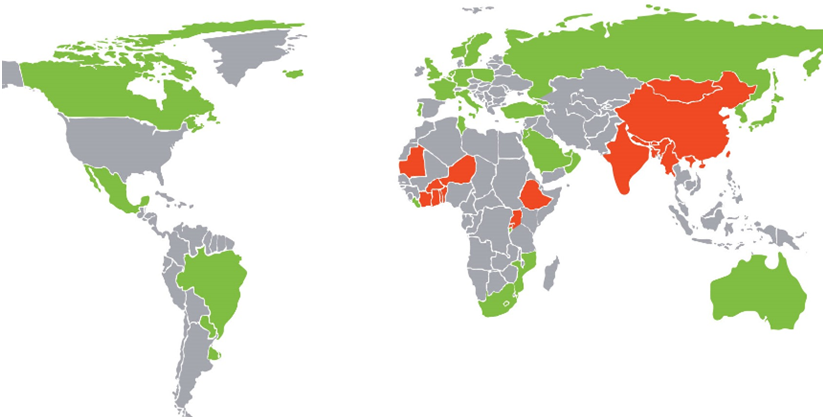 We see that most of the developed countries, including the USA, are in yellow. These countries are at their maximum expansion capacities at this stage. Moreover, they face the risk of gradually lagging behind. In the meantime, China with its huge demographic and natural resources still has miles ahead to advance in leaps. Metaphorically, it is the same as if the American economy was moving in a carriage and the Chinese was driving an automobile. For the other countries, it means that the disparity between those two giants and the rest of the world in terms of production output will solidify in the nearest future. It is also necessary to point out that during the past years investors got pretty used to China's economic outperformance. As a result, the signs that this automobile's advance became bumpy have dramatic effect on the market sentiment.

On top of that, China is the largest exporter in the world by value. Its prime trading partner is the United States, which consumes around 20% of the Chinese exports. That means that the two economies are closely tied to each other, and a minor misbalance in one's economy inevitably affects the other one. The latter is confirmed by the recent data: due to the two-year trade conflict, China is already reaping the negative effects significant even on historical charts. A similar picture starts looming in the US, although the level of gravity is not as high. Not yet, at least.

It means that the American and the Chinese economies, as big as they seem, are also very sensitive to each one's movements.

On the other hand, most of the other countries list the US and China as their prime trade partners due to the vast consumption and production of the latter. What stands as a minor trade volume for the US or China, will be the main or a major part of the trade balance for any other state. Any redistribution of forces will shake the countries like Germany or Australia, although these themselves are the wealthiest and strongest economies in the world.

The conclusion from the arguments above is the following: the US and China will stay the biggest and grow stronger in the nearest future, and the rest of the world will stay exposed to their unchallengeable economic domination.

In other words, when the US or China sneezes, the world trembles.

How did trade tensions influence the financial market?

The trade war has started in March 2018. At that time, the price of the US dollar against the Chinese yen was at the levels of 6.28 after a long-term downward trend that had continued through 2017 and the beginning of 2018.

This is the approximate chronology of the conflict:

As in any conflict, this trade war had periods of different conflict intensity. Some were full of high-intensity action from both sides, the others showed pacification and deliberate ceasefire. The chart below puts the USD/CNH price action and the trade war activities on the same table, so we can see how the trade war dynamics have been impacting the currency pair. 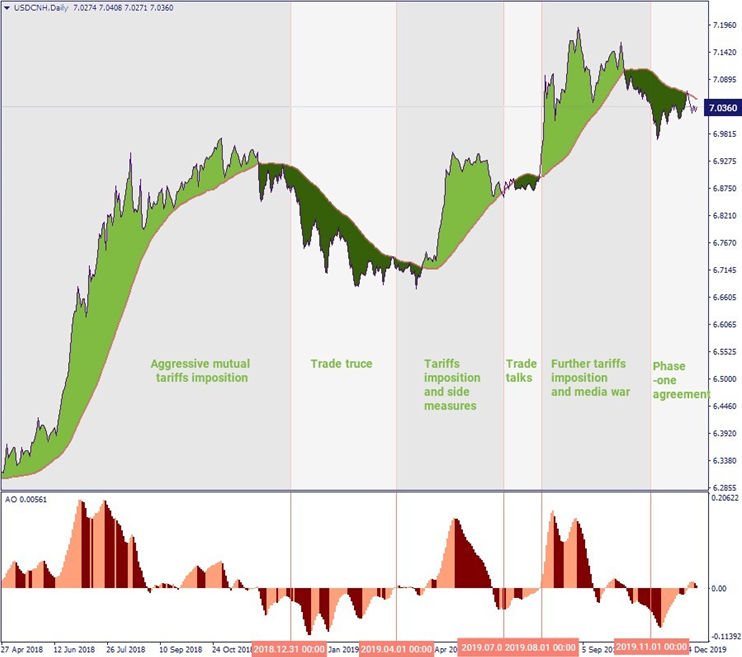 We see that the conflict escalation phases coincide with the periods of appreciation of USD against the CNH, while the conflict pacification phases show the currency pair decline. The same is visible in the Awesome Oscillator window.

The reason behind that is the following. The more intense the crisis was and the more uncertain the future seemed for the market participants, the more the US dollar was demanded by investors as a resort to conserve their funds with a safe-haven currency. Conversely, when things were going back to normal, the optimism of the market participants was supporting a more risk-accepting mood and hence the demand for the Chinese yuan grew.

The moment of truth

The logic behind the appreciation of USD against the CNH in crisis times is the same that makes the price of gold or any other safe-haven currency or commodity gain value when things look bad. It rests on the psychology of the investors: when the future outlook is negative, they seek to re-direct their funds into safe-haven assets, such as the USD in the case of USD/CNH, also JPY and CHF among the major currencies, gold as mentioned already. Consequently, the higher demand for these assets raises their prices.

Hence, the fundamental analysis here is critical. A negative news release pushes the safe-haven currency or commodity up, so you need to act on it accordingly.

With respect to December 15, it is a major deadline due to its economic and calendar gravity.

The US President Donald Trump will have to decide whether he imposes tariffs on 160 billion USD worth of Chinese imports or not. If he does, that will be another conflict re-escalation step. Hence, in this scenario, the USD would rise in the short-term in line with other safe-haven currencies, continuing the upward trend which we observed on the daily chart of USD/CNH. In the long-term, though, the negative impact of the trade war on the US economy would strike at the USD too.

On the contrary, if the tariff imposition is postponed or revised, that would be generally good news, supporting the Chinese yuan and other risky currencies in a corresponding manner.

As you have noticed already, the Forex market is quite sensitive to any incoming news - especially on such an important topic as US-China relations. Just yesterday we had a tweet from Donald Trump - and this single line posted made the Forex and stock markets soar and take on the risks! However, the same may happen in the opposite direction should an unexpected piece of information appear. The reality is - you never know for sure what will happen on the market.