There may be a surge in coronavirus cases - Global Times

Too early for optimism 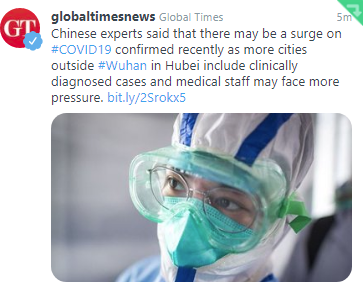 The Global Times cites several experts who talk about changes in diagnosing cases and switching to CT scans. While that has cleared a backlog in Wuhan city, there are surrounding areas that also have backlogs and haven't implemented the measures yet.
"Hubei may see more confirmed cases as many cities around Wuhan that also face a severe epidemic situation would include clinically diagnosed cases. Compared to Wuhan, these cities have inadequate medical resources and they will face more pressure in receiving more patients," Yang Zhanqiu, deputy director of the pathogen biology department at Wuhan University, told the Global Times.
He cites Huanggag and Xiaogan specifically however it's a nuanced view and the headline is a bit more than the story demands. The story also notes, importantly, that outside Hubei, 267 new confirmed cases were reported on Thursday while it was 890 on February 3, a decline in 10 consecutive days.
h/t @ransquawk for the heads up.