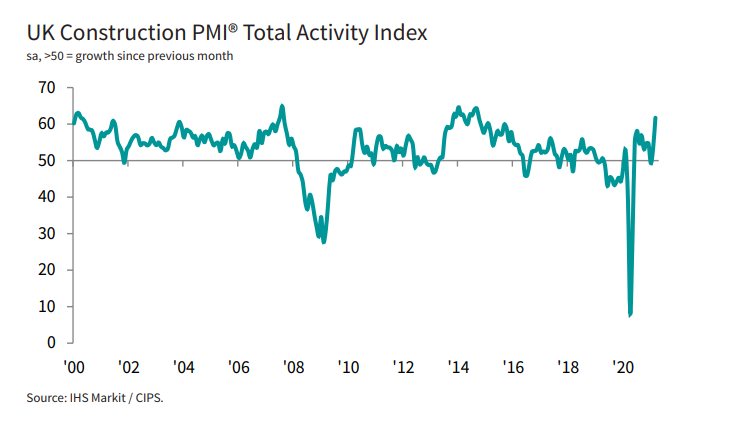 That's a major beat as construction activity saw a robust rise in all major sub-sectors last month, with output growth the strongest since September 2014.
Housebuilding was the leading sub-sector, posting its quickest growth since July 2020 with strong increases also seen in commercial and civil engineering activity. Improving client demand and new project starts were key to the jump in March.
Markit notes that:
Invest in yourself. See our forex education hub.

"Improving confidence among clients in the commercial segment was a key driver of growth, with development activity rebounding in sectors of the economy set to benefit the most from the improving pandemic situation. The increasingly optimistic UK economic outlook has created a halo effect on construction demand and the perceived viability of new projects.

"Constrained supplier capacity and stretched transport availability continued to pose challenges for the construction sector in March. Short supply of products and materials pushed up purchase prices at the fastest rate since August 2008.

"Continued pressures on supply chains are expected in the near-term, but these concerns did little to dampen confidence about the business outlook. The latest survey pointed to the strongest growth projections across the UK construction sector since those reported during a post-election bounce back in June 2015."