In reality....Bitcoin just goes up

Did Yellen's comments send bitcoin higher?   I can't really connect the dots on that one, but the so called cyprtocurrency is moving higher today. 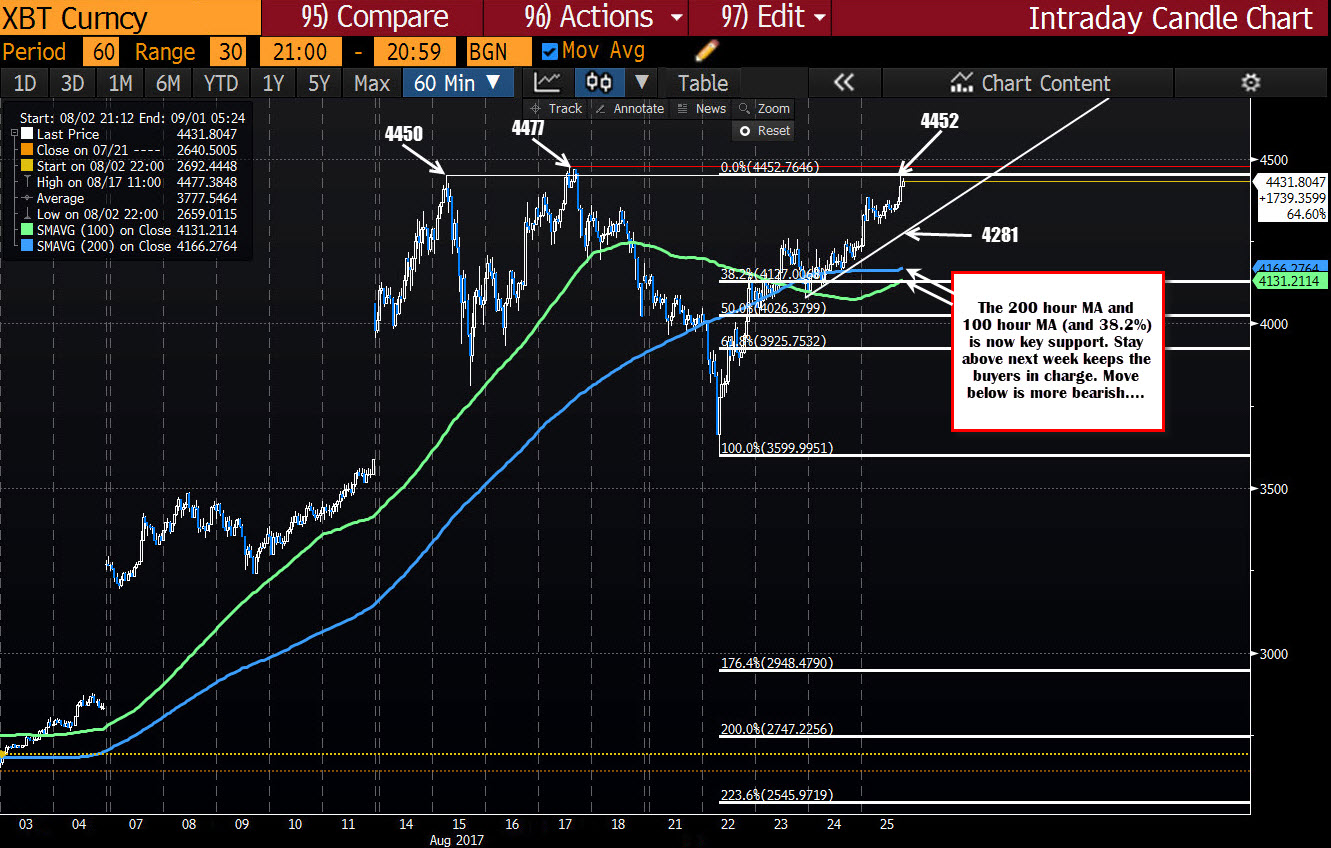 The price has nearly recovered all of the near 20% decline from the highs from last week (it bottomed on Wednesday and quickly recovered).
As outline in the post yesterday, the cryptocurrency found support near the 100 hour MA during yesterday's trading (greenish line), later moved above the 200 hour MA (blue line) and ratcheted higher in a slow-ish day.
Today, the buyers came in early in the session and have been able to push the price toward the highs from August 15 at $4450. The high price today stalled at $4452.   There is a higher high at 4477.   So although the price is higher today, there is a cause for pause.
The problem with bitcoin for sellers is "Do you really want to sell it in front of a weekend?".
I can see if you are taking profit.  However, new sellers on two Friday's this week, got hammered with gap openings (I mean big gaps too).  The 2nd gap almost got filled this week, but it did not happen until the price moved nearly $1000 higher.  That is a lot of pain for naked shorts.
So although higher and although the price is testing highs at $4450 and $4472, I can't recommend selling unless you are long and taking profits for weekend beer money (you can go to the store and buy beer with your bitcoins).
Now when something goes up at an unsustainable pace, there is room for corrections (some think the price will ultimately collapse).
Where does the bullish bias turn to bearish?
Looking at the chart above, the trend line at 4281 will be eyed for clues. A break below would be a chink in the bullish armor.
A more meaningful break technically, would be a move below the 200 and 100 hour MAs at 4166 and 4131 respectively (blue and green lines). If you follow the green line, the price tends to react to that MA line. So test would be support. A break would be bearish.
Until those levels are taken out - one by one - do you really want to be short bitcoin?  I wouldn't.  Wait until next week and a break, before thinking about selling.
-------------------------------------------------------------------------------
FYI, here is a trading cryptocurrency guide from our friends at Finance Magnates. It's a full list of online brokers offering Bitcoin, Litecoin, Ethereum and more.