The US stocks opened lower, drifted higher and move back down into the close. The major indices closed near low levels for the day with the NASDAQ index down the most at -0.4%.  Below are the percentage high, low and close levels for the North American and European major indices. A number of the indices in Europe also closed near session lows.

In the US debt market today, the US treasury auctioned off $38 billion of 3 year notes without a hitch. That was the 1st auction of the major monthly refunding. The treasury will auction off 10 year notes tomorrow and 30 year notes on Thursday.  Looking at the changes, the yields are mixed with the shorter end moving up marginally in the long run moving down marginally. The yield curve is reflected by the 2 – 10 spread narrow by about 1.5 basis points.

There was no major economic news coming out of the US today. That impacted trading activity as the market awaits key economic events later in the week including the FOMC decision on Wednesday, Christine Lagarde's first  ECB decision (and presser) on Thursday (both US and ECB are expecting no change in policy), and the UK election on Thursday as well.
Ranking the strongest to the weakest currencies, the CHF is ending as the strongest, while the NZD is the weakest. The USD is in the middle with gains versus the AUD, NZD and JPY and declines vs the CHF, CAD, GBP and EUR. 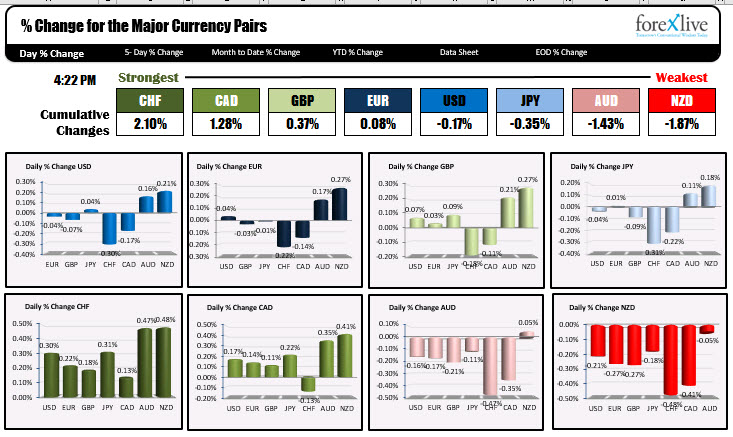 Some technical levels to watch in the new trading day:
Wishing you all good fortunate in your trading.