NZDUSD buyers continue the run off the lows

The NZDUSD stepped higher and trades at new week highs

The NZDUSD moved to the lowest level since October 26th this week. The low extended to 0.6481 in trading yesterday.
The USD started to sell off yesterday helped by weaker data from the Markit PMI.  Despite lower stocks (risk off?) the traders had enough of the NZDUSD selling, and joined the USD selling trend. The dollar ended as the weaker currency of the day yesterday.
Technicals have played a role in the recovery.
As I often write, in order to tilt the bias in a new direction, you need to take out targets in the opposite direction of the main move. You wrestle the minimum control and target the next levels. 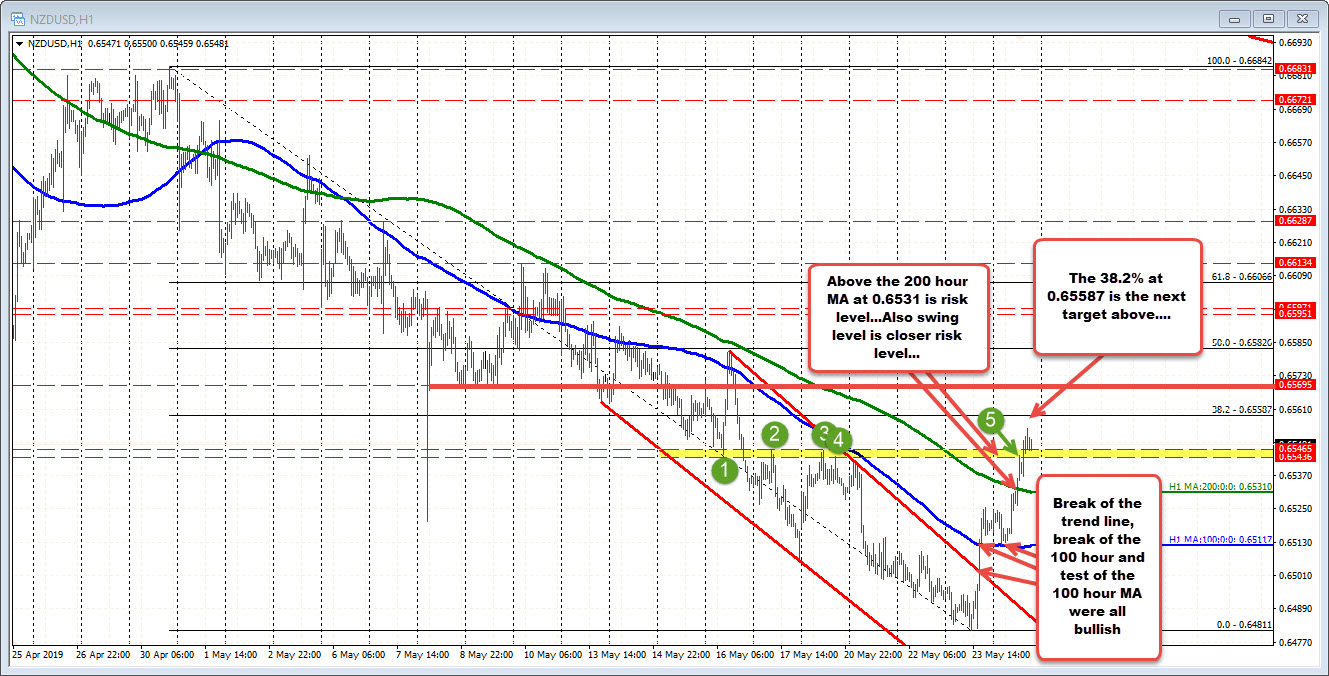 Looking at the hourly chart above, the trend in the NZDUSD has been to the downside. There have been ups and down, but note that since May 13, the price has spent most of the time below the 100 hour MA. Yes, there were brief moved above the MA, but they were short lived and led to lower runs.   That is bearish.
ON Tuesday of this , the price of the pair approached the 100 hour MA (blue line), only to be turned away.  Sellers remained in control below that  MA line.
Yesterday, that pattern of staying below the MA was broken.  The bias was shifted to the upside.
Looking at the chart, the price of the NZDUSD moved above the 100 hour MA (blue line), and stayed above. In fact, there was a nice test of the MA line in the Asian session today, that found buyers leaning against the level. Buyers were encouraged. Sellers gave up. The price moved higher.
The run today approached the 200 hour MA, and then broke above that level too.
More recently, the price has moved above the 0.6542-465 swing area, with eyes on the 38.2% of the move down from the April 30 high.
Now.... if you listened to the price action and technical tools there were some low risk levels that gave dip buyers a shot to play the counter trend.
What now?
If the buyers are to keep control, they have to keep the price above the 200 hour MA (green line at 0.6531). Closer support is right here at the 0.6543-465 swing area (yellow area).  Stay above an tthe 38.2% at 0.6569 and then the 0.6569 and 50% at 0.65826, are targets.
If the swing level at 0.6543 and 200 hour MA at 0.6531 are broken to the downside, the move higher will just be a normal 38.2% retracement of the move lower.  Sellers would be more in controL  IN fact, if you like the downside, selling against the 38.2% is not a bad idea.
For now, the tilt intraday is a little more to the upside though with hurdles looming above....