NZDUSD moves to new session highs, but backs off

Makes a new high by 2 pips

The NZDUSD has reached to a new session high at 0.65753. That was just 2 pips higher than the earlier high.

The pair currently trades at 0.6568.  There may be some corrective action if the price cannot extend to new highs at least intraday.  The high from yesterday came in at 0.6561. A move back below that level on a correction could see some further selling into the weekend. Stay above and the buyers remain in control. A little battle is going on as the we comes to an end on the hourly chart.
The NZD remains the strongest currency of the majors with gains against all the majors.  It is up the most versus the CAD (higher by 1.04%). That move was helped by much weaker than expected Canadian jobs report this morning. The NZDUSD is up 0.4% on the day. 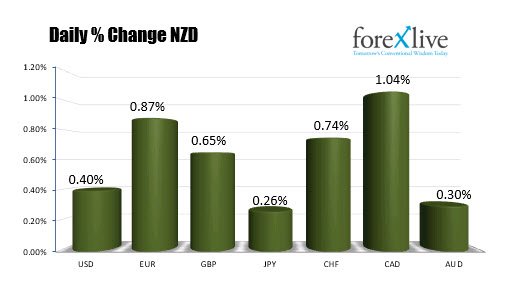 So, overall the buyers are more control and have been in control this whole week. The price is above its 200 day moving average at 0.65376 which is also bullish. However, the pair is testing a swing level and the 50% midpoint of the 12 month trading range. So there may be some cause for pause.
ForexLive