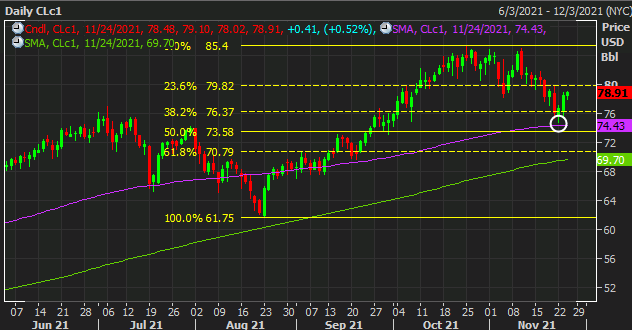 Invest in yourself. See our forex education hub.
The bounce this week comes as price came close to testing the 100-day moving average (purple line) but sellers fell short of contesting the key level.
And after the SPR release new yesterday, which was rather underwhelming to say the least, oil prices have bounced back as buyers fade the risks to the move after having been "worried" about it over the past two weeks.
As mentioned before, I'd attribute the oil drop more towards some technical exhaustion after having seen a run of nine straight weeks of gains from August to October.
So, a bit of a breather in the past two to three weeks isn't exactly unfounded - not to mention that seasonally this isn't a great period for oil in general.
I'd argue that gains are still more limited closer to $80 for now as COVID-19 concerns - especially in Europe - are a risk factor that seems to be circling back while we are also waiting on OPEC+'s next move when they meet up next week.
But for now at least, oil buyers have shown where their appetite is when coming back into the picture with regards to the charts. That provides some encouragement for more upside in the months ahead if the fundamental landscape plays along.