Oil headed to $49, but what happens next is key 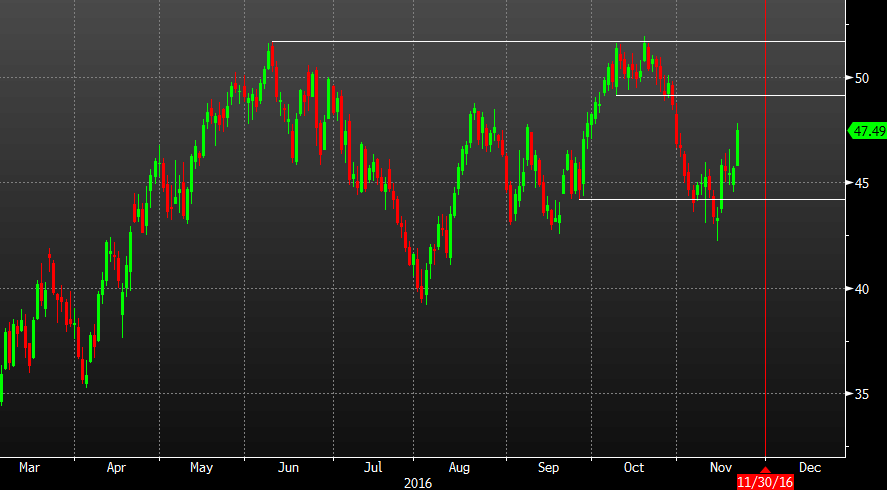 Oil is the big winner today, with WTI up nearly 4% to the best levels since the start of the month.

The optimism is based on murmurs from OPEC technical meetings in Vienna ahead of the Nov 30 production decision. Iran's oil minister Zanganeh said a deal is "highly probable" and Russia may also agree to limit output.

Even Goldman Sachs jumped on board with a bullish call on crude.

"Our base case now is that an OPEC production cut will be announced and implemented," they wrote.

Based on the likelihood of an OPEC agreement, they expect oil prices to average $55 a barrel during the first half of 2017.

Technically, the break higher today begins to fill the 'gap' of the drop that began at the start of the month. It will be filled when the Oct 10 low of $49.15 is touched.

From there is when it gets interesting.

A push above $50 would target a double-top located just below $52. Even a challenge of it would be bullish because triple-tops rarely hold.

And if you scale back and look at oil in the broader picture over the past two weeks, its ability to climb despite a rising US dollar is positive.

So if we look towards Nov 30, we're likely to be in the zone just below the Oct highs when the announcement comes. At the moment, a production freeze (and a break higher) looks awfully tempting.

Alternatively, if the Oct high of $49.15 can hold and a triple-top doesn't form, then look for the range trade below $52 to continue.