The event has largely been priced in 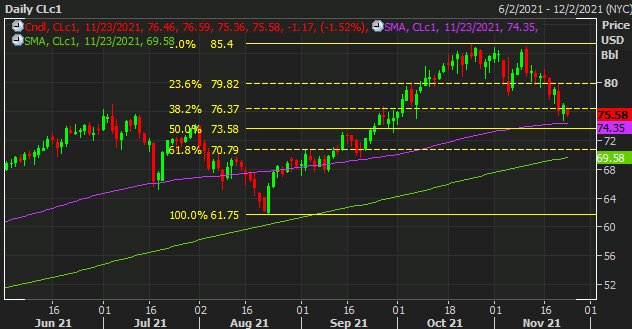 Don't be surprised to see oil start to gather a bit of traction back towards the upside by the end of the day. I mean the key headline risk is out and what has been a threat since last week is over and done with, and with little reaction seen in oil prices.
The market has had plenty of time to digest the SPR release and that is supposedly what weighed on prices over the past two weeks, though I'd attribute some of that to technical exhasution - something which I've been mentioning constantly.
Still, the headlines may reverberate a little more as the market will be keen to look at how OPEC+ is going to respond now that the cat is finally out of the bag.
I doubt we'll see any overreaction by the bloc but the inaction may see the market be a little nervy about the SPR release that will hit the market come December.
But still, the technical indications suggest that if anything else, oil may put up a modest defense at the 100-day moving average (purple line) @ $74.35 and perhaps at the 50.0 retracement level of the August to October swing move higher @ $73.58.
Despite the SPR release news, which involves quite a number of countries, I'd argue that the oil market will still keep rather tight heading into next year and if anything else, this could see OPEC+ step back on action to flood the market with more oil. The latter holds more significance in my view, so we'll have to see how that plays out too.
Invest in yourself. See our forex education hub.