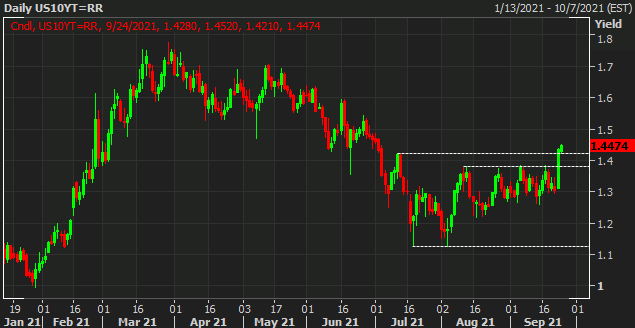 The bond market has been rather indecisive and "lazy" over the past two months but it finally becomes relevant again for markets as we saw a breakout in yields yesterday.
10-year Treasury yields climbed all the way up back above 1.40% and sealed a technical break above key resistance near 1.38%, which capped any advance and bond selling since August. This was certainly quite the delayed reaction to the Fed.
So, what's next for yields and other asset classes?
Given the technical breakout, 10-year yields look like they have plenty of room to maneuver as they rise to their highest since the start of July above 1.44% currently.
The fact that price action had been "trapped" for so long just gives more impetus to any major push at the moment, purely from a technical play. 1.60% is a plausible target.
While the dollar had a relatively poor showing yesterday and only managed to put up a fight late on, I reckon the greenback is unlikely to show much material weakness in the big picture of things unless the Fed dampens rate hike expectations.
As yields climb further, it is hard to argue for a persistently weaker dollar unless risk sentiment continues to rally as seen yesterday. Key word there being persistently. And of course, not everyday is going to be a bumper day for stocks (I may eat my words here).
I mean, EUR/USD is still down 160 pips from the highs at the start of the month and even with the sharp advance yesterday, USD/CAD is up 170 pips since the early month low.
While the dollar may look weak, it certainly hasn't been the case over the past few weeks but that arguably has been helped by more shaky risk sentiment during the time.
In any case, higher yields will be a clearer message for yen pairs to advance and that will be one to watch in the week(s) ahead if anything else.
As for equities, they look rather unfazed as the market is still taking comfort (or at least using it as an excuse) from confidence that the Evergrande situation will be resolved in a positive manner. But higher yields will surely pose a problem eventually.
Selling in tech stocks will be the first signal to watch amid a rotation play but we may not see this be too big a problem for equities in general until yields get to back towards the highs seen in March to May - broadly speaking.
That said, the pace of any selling in bonds will also be something to be wary about for now.