The USD is weaker in early trading

As the North American session gets underway, the NZD is the strongest and the CHF and USD are fighting for the weakest. The NZDUSD bounced off the 200 hour MA support in the European/London morning session, and the last 5 hours has seen the price race higher (it is trading at highs now).  The AUDUSD also followed higher. The gains correspond with the rebound in stocks. The US stocks have seen early declines erased in the US futures (Dow is higher, Nasdaq near unchanged, S&P modestly higher). Earnings today include 3M (announced and beat on the top and bottom line today - stock is higher), American Express (announced and beat by stock is down), Johnson & Johnson (beat and stock is higher), Microsoft (announces after the close), Starbucks (after the close), AMD (after the close) and Verizon (beat modestly on the top and bottom line). 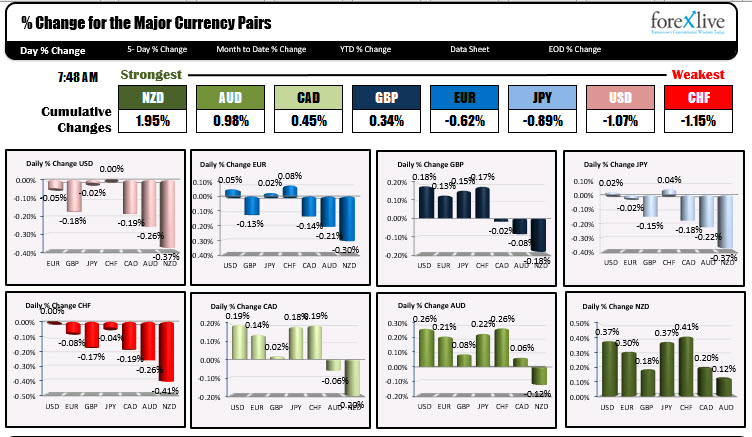 The ranges and changes are showing mixed results. THe range in the USDCHF, and USDJPY is woefully low at 17 and 18 pips, while the GBPUSD, AUDUSD, USDCAD and NZDUSD are pushing their 22 day average ranges with the NY session ahead.  Each of the commodity currencies has seen price bounce from earlier extremes, and are now trading at the opposite extremes (higher for the AUDUSD and NZDUSD and lower for the USDCAD - all are dollar lower).  The JPY crosses has also seen earlier declines erase declines and now trading higher and near highs for the day in a "risk-on" play. 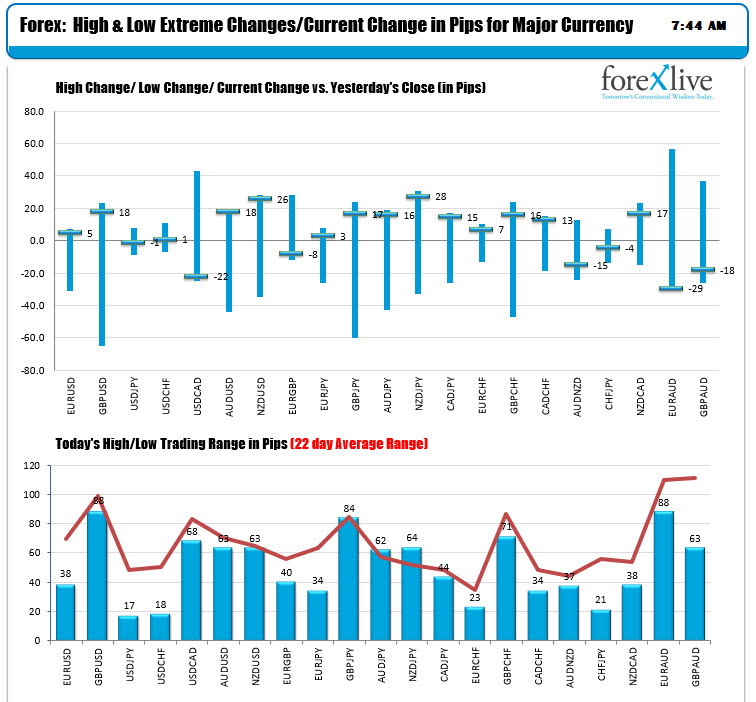 In other markets a snapshot shows:In the US stocks, the major futures indices are mixed (but off low levels overnight) with Microsoft, Verizon all scheduled to release after the close. Tesla, Apple, Facebook, Boeing, McDonald's, Visa, Caterpillar and Chevron all scheduled to report later in the week. A snapshot of the stock futures are implying:In the European equity markets have rebounded sharply after yesterdays sharp declinesIn the US debt market, yields are higher after yesterdays declines which stalled the tenant 30 year fall by about 5 basis points. The yield curve is also marginally steeper with the 2 – 10 year spread at 92.54 basis points vs. 91.46 basis points at the close yesterday.

The benchmark 10 year yields in Europe are trading mixed with Italy and Spain down, while Germany, France, UK yields are marginally higher.