The NZDUSD average trading range of last 22 trading days has been about 67 pips. The trading range today is up 126 pips. That's just a pips off of doubling what has been the norm.

The dominant move has been to the downside after an early rise in the Asian session. Risk off flows has sent the pair lower.  The technical bias has gotten progressively worse as well which has helped push the pair lower.
Looking at the hourly chart above, the price action on Friday move to the highest level since March/April 2019. However, on the hourly chart the pair ran into a topside trend line resistance level and found sellers. Those sellers took the price toward the swing hi from Wednesday's trade and stalled near that level into the close on Friday.
Today, the price opened lower but quickly rebounded. However momentum could not be sustained and technical levels on the move lower, started to be taken out including the:
More recently, the price has extended below swing levels between 0.6674 and 0.6683 along with the 61.8% retracement of the September trading range at 0.66754. The area between 0.6674 and 0.6683 is now close risk for sellers.
On the downside the next targets come against lows from September 11 at 0.66347 and 0.6641. Below that and traders will be eyeing the swing lows for the month including 0.66134 and the September low (and natural support level) at 0.6600.
Sellers have run the pair lower with little in the way of a correction today (the biggest corrective move intraday has been 15 pips off the days lows). Because of the lack of corrective action, and the oversized trading range, those can be a reasons to anticipate a slowing of the trend and perhaps a move higher (see 5- minute chart below). Indeed, the price has moved more sideways over the last few hours of trading on the 5 minute chart below. Is it a precursor to a corrective move higher?
Remember, however, trends can be fast and directional and go further than expectations. As a result be careful in trying to pick a bottom. 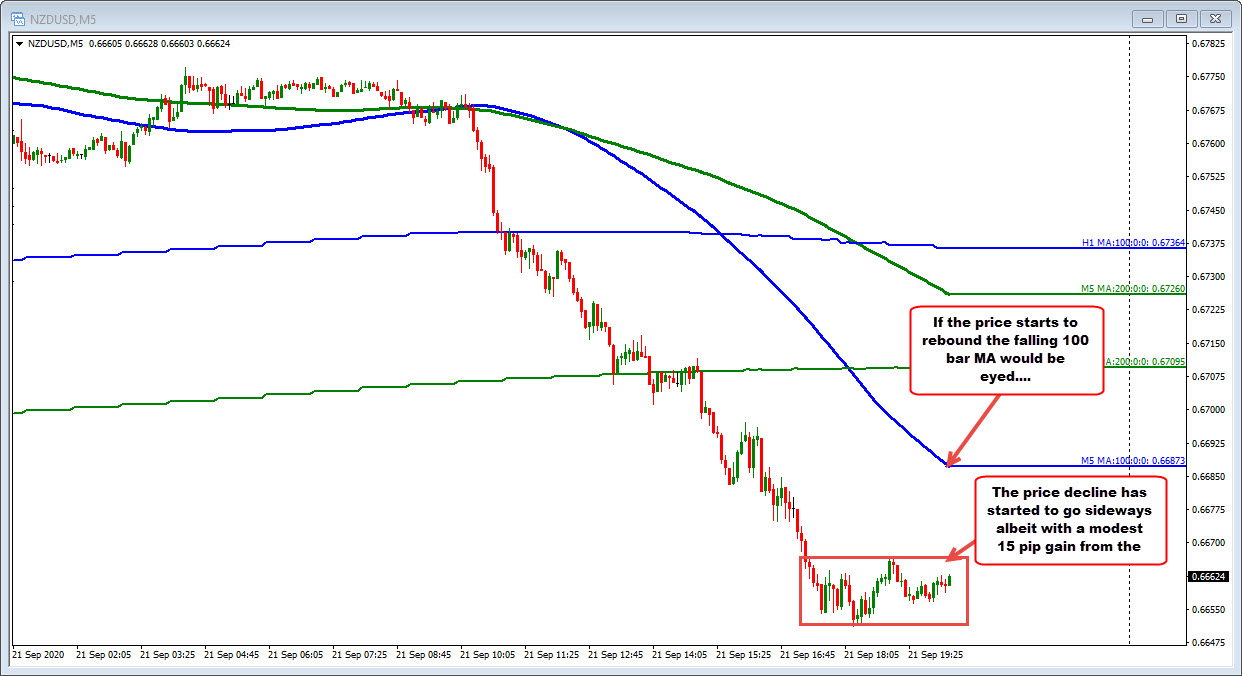