There has been a persistent bid in oil since the OPEC decision that's flown under the radar because of so much happening elsewhere.
Aside from the brief spike on the Saudi attack, crude is now at the best level since mid-July and is threatening the best levels since May. It's up 17.5% from the October low. 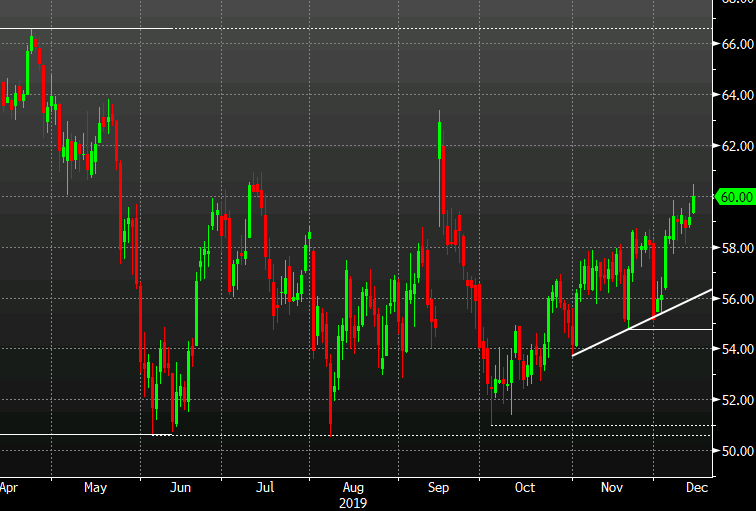 Another notable observation in the oil market is how narrow the range has been. It's been $16 since January 9. Excluding those nine days (which isn't unreasonable because of the wild end-of-year ride in markets), the $16 range in WTI this year is the narrowest since 2003 -- which was right before the super-cycle got underway. 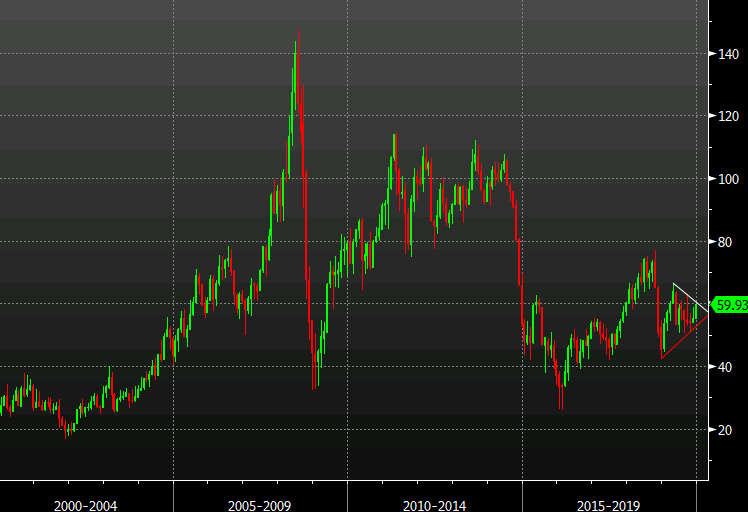 I have been doing spending all my free time in the past few weeks on oil. There is a growing belief that shale growth isn't going to meet expectations. The US is currently producing 12.8 million barrels per day of oil and the baseline is that will rise to 16.5mbpd by the middle of the 2020s.
That assumption is looking highly suspect. Growth next year is now expected to be just 200,000 bpd over end-of-year levels. There's a risk there's no growth at all from current levels and that we're very close to the high-water mark for US production.
That's critical because the market is expecting those US barrels to come into the market and because companies deeply cut development budgets for traditional fields and offshore because they were struggling to compete with shale.
In addition, the debt market is turning on shale -- especially outside of the Permian basin. The entire industry was fueled by cheap debt from 2010-2014 and in 2020-2024 that debt is coming due and is going to be very tough to refinance. Chevron announced a $10-$11 billion write down this week. That's the biggest in the oil market in years and about half of it is due to shale writedowns in the Marcellus and nearby regions. There is a huge shift to generating cash and paying down debt. The market is killing any company that's still trying to grow production, especially if it's not throwing off cash.
2020 might be the year oil take center stage. Everyone has written off crude but global demand is still rising and if we see a pickup in global growth the market could quickly become undersupplied.