Where and when is the best time to buy the pound?

If there's one trading strategy I love it's a long term trade. Scaling in with small positions across many levels reduces the everyday noise and can make for many a sound nights sleep.

I'm getting itchy to buy into the pound and it's not on my perceived Brexit result (that's another trade altogether), not on what the BOE may do, and not on what woes are troubling the world.

It's purely based on the fact that in the last 30 years the pound has failed to close below the 1.40 level on a yearly basis despite that level being breached within that particular year. 1984 was the last time there was a close below. 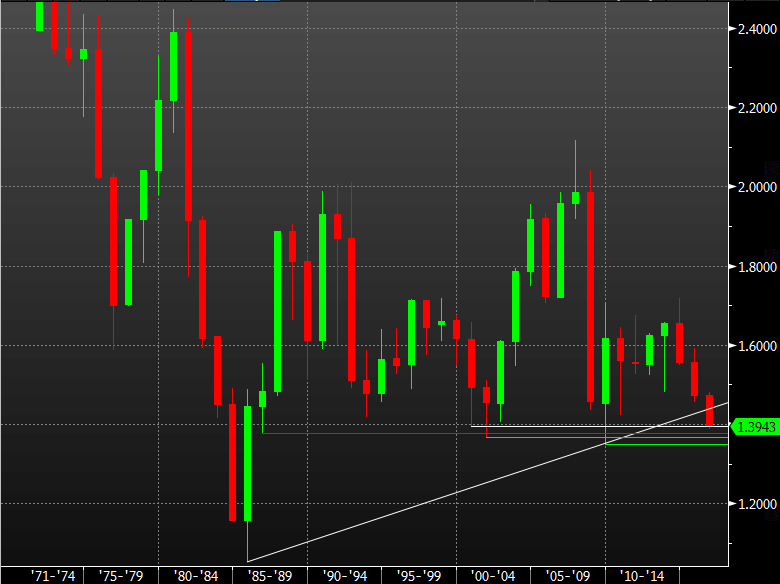 The same can be said about the topside and the 2.00 level.

Looking at the all the yearly lows that have ducked under 1.40, here are the lows and their closes.

We're into an area that has historically been support and I see no reason not to trade it on that fact alone. If the chart above was a daily or hourly or 5 minute chart there would be many people willing to trade it. The premise is the same but it's the mechanics that are different. The issue most people have is adjusting their mindset to trade longer than 5 minutes, a day or a week. The factors that apply to markets each and everyday can't often be tuned out. We live day to day and our minds are set up for that.

However, if you can apply the same discipline that you would use on a shorter term trade to a longer term strategy, it can work and be very profitable.

One of my weaknesses is getting into long term trades to early. In this case I held off entering at 1.3950. Because of the near term noise, and this move in the pound this week, I'm not convinced that there's not more downside to come and that we don't see a test of these lower levels. For once I'm going to push my patience as far as I can.

I'm the first person to say that every trade and move is different so I fully understand that this trade might blow up and the pound enters new territory and holds below 1.40. But, we can use that statement against any trade so we should apply the same discipline we do in any other trade. That discipline is finding and using the levels to define our risk, like the levels I've detailed above.

The 1.3500 level marks a big line in the sand for this strategy and that will be my first assessment point. If I started here, that risk is under 500 pips. That's a fairly low amount for a long term trade and usually I would look to give my positions some room to roam. If we get a further move south to some of the other levels, that risk is reduced further and that's what I like most about this play. So, I'm pencilling 1.3800 to start getting in (that's above the 1.3770 1986 low and takes into account the 1.38 big figure). If I stay above my final pain levels I'll be happy to sit in the position for as long as needed and I'll be looking initially at 1.50 as a first target, then 1.60. If all is going well I'll probably refine those targets to any big levels on the way there.

The last time I traded multi year levels was in early 2014 and AUDNZD. I was trading off of levels going back 20 years. My entries started from the 1.06's and the initial target was up at 1.1200, which it reached. Then a series of failed highs at 1.1300 had me exiting the whole position. I was looking for more but the price action told me I was unlikely to get it.

These big levels can work if you have the mentality to use them but it is paramount that you apply the same discipline as you would to any other trade.