In contrast to the New York Fed which lowered their estimate for fourth-quarter GDP to 0.6%, the Atlanta Fed has raised their estimate to 2.0% from 1.5% (released yesterday).
In their own words:

The GDPNow model estimate for real GDP growth (seasonally adjusted annual rate) in the fourth quarter of 2019 is 2.0 percent on December 6, up from 1.5 percent on December 5. After this morning's release of the employment report by the U.S. Bureau of Labor Statistics and this morning's wholesale trade report from the U.S. Census Bureau, the nowcasts of fourth-quarter real personal consumption expenditures growth and fourth-quarter real gross private domestic investment growth decreased from 2.0 percent and -2.8 percent, respectively, to 2.3 percent and -0.8 percent, respectively, and the nowcast of the contribution of net exports to fourth-quarter real GDP growth decreased from 0.40 percentage points to 0.35 percentage points.

Just a few weeks ago the estimate bottomed at 0.3%.
The question now is of the Fed's estimates, the New York Fed is at 0.6%. The Atlanta Fed is at 2.0%. That's a pretty big spread. Who's model is correct? 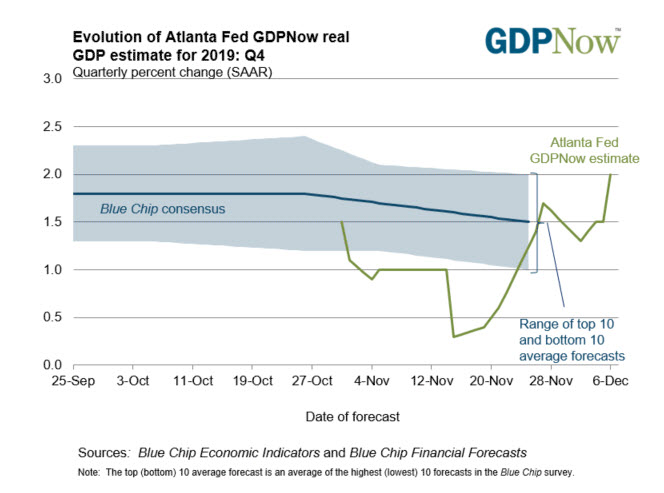