GBP/USD pushes to session highs for the day at 1.2435 ForexLive The pair is inching a little higher on the day, up by about 0.5% but has been largely consolidating between 1.2300 to 1.2500 for the most part over the past few days. 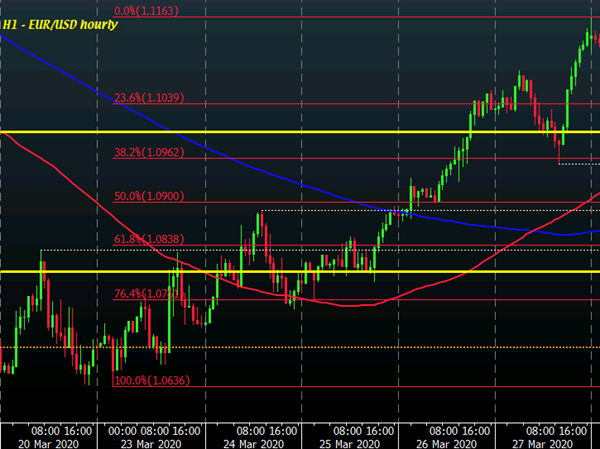 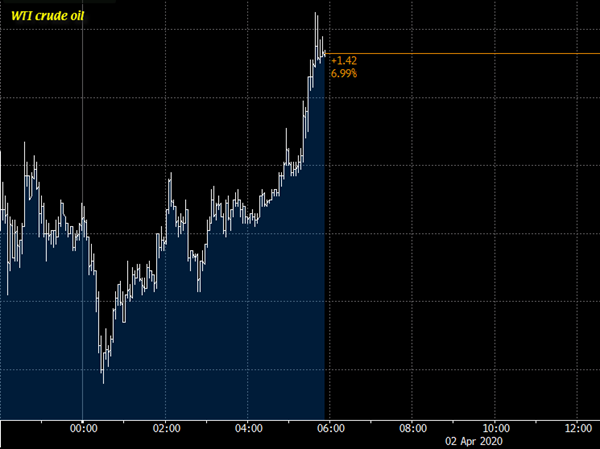 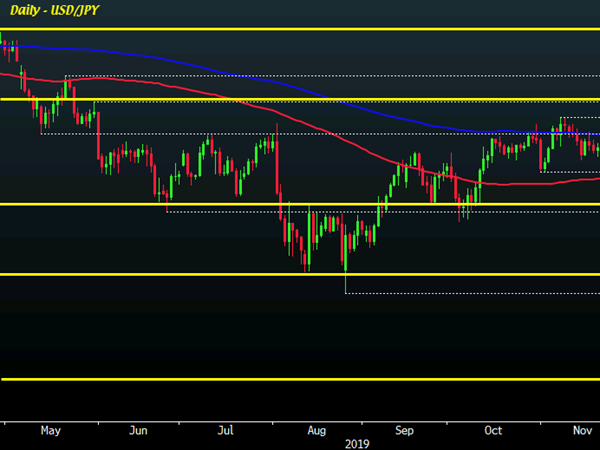 USD/JPY tug of war continues on the week 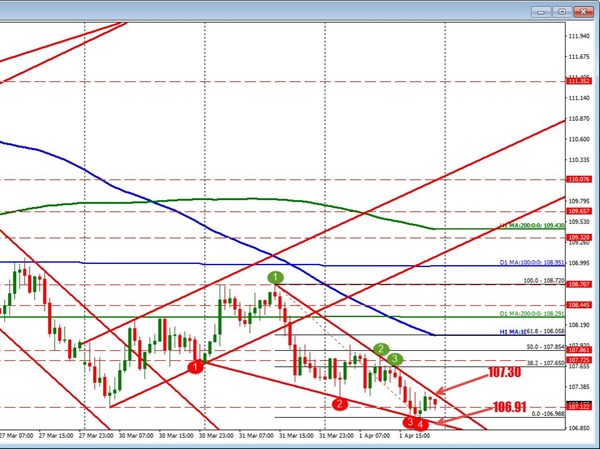 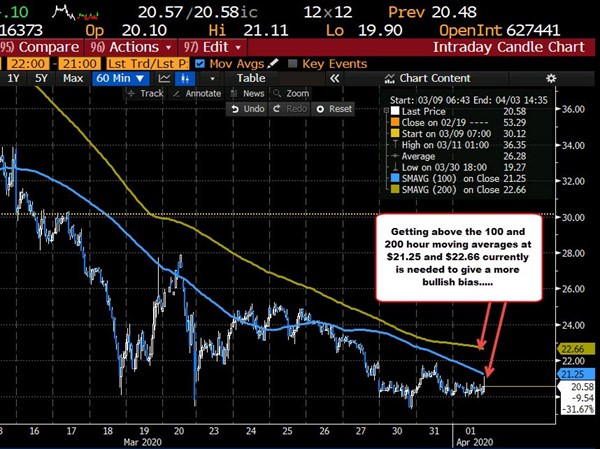 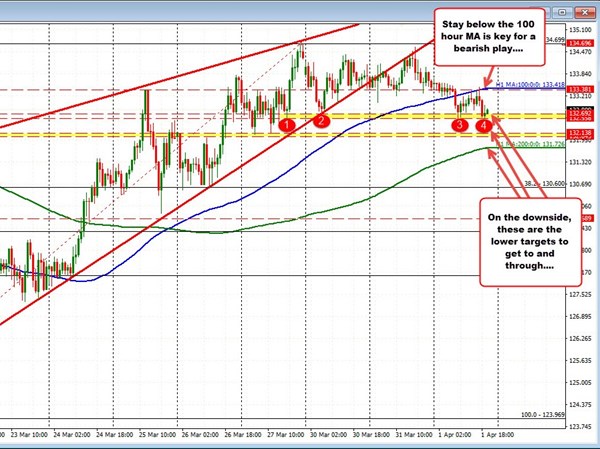 The GBPJPY tilts to the downside. Here is why...

Stocks heading into the last hour of trading...Buckle up your seat belt 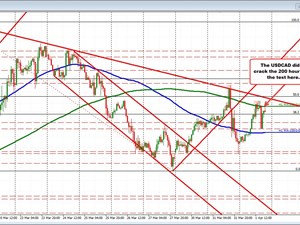 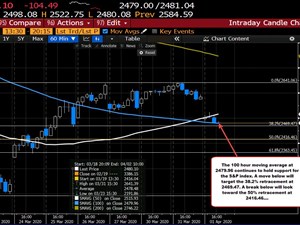 Holds just above the 100 hour MA.  Key barometer. The S&P index trading at session lows and in the process is testing the 100 hour moving average currently at 2479.97. The low for the day just reached 2480.32. A move below that moving average could lead to further downside momentum with the 38.2% retracement of the move up from the March 23 low at 2469.47 and the 50% retracement of that same move higher at 2416.46 as the next downside targets. 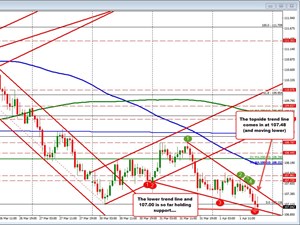 The USDJPY remains above the 107.00/trend line

The sellers remain more in control but some stall (for now at least) The USDJPY remains above the 107.00 natural support level and a trend line around the same level (see earlier day ).  The price has moved to a low of 107.01 so far.   A move below would open the door for more selling. 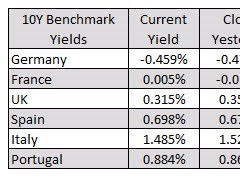 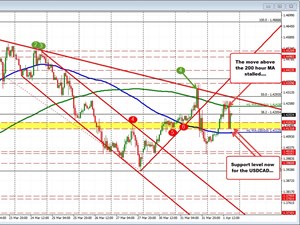 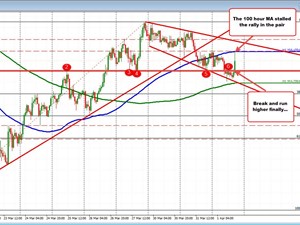 Catches the bid from the AUDUSD. The run to the upside was less than the AUDUSD but it still was about 60 pips in a short burst.  Traders did come in against a resistance technical level which increases the levels importance going forward. 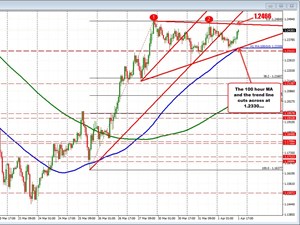 GBPUSD moves back toward closing levels

The pair remains in an up and down range above the 100 hour MA The GBPUSD has moved back toward the closing levels on the day after an earlier decline has been erased. 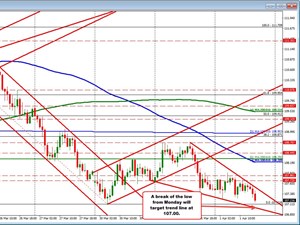 The USDJPY trades to new session low The USDJPY trades to a new low and looks to test the Monday low at 107.116. That was the lowest level since March 18. On a break, the 107.00 level will be eyed. Not only is it a natural support level, but is also a lower trend line.

US stocks open lower with declines. Nasdaq does better but still lower.

S&P down -3.57% The major US stock indices are opening lower. The NASDAQ is outperforming but still down about 2.8% on the day. The snapshot of the major indices are currently showing 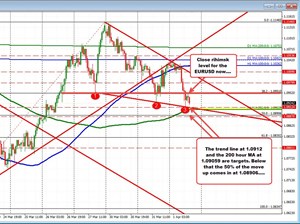 EURUSD moves away from its 100 day MA. Bears in control.

Trades near session lows. The EURUSD has moved away from its 100 day MA at 1.10421 today after an early Asian session sniff of the level was turned away. 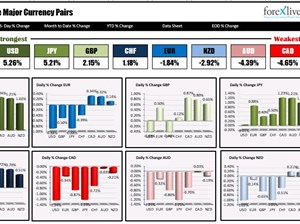 Stocks moving lower The USD is the strongest and the CAD is the weakest as NA traders enter for the day. Stocks are lower as are US yields.  Gold is rebounding after falling earlier and bounciing. Oil is trying to stay above $20 as the Oil war continues between Saudi Arabia and Russia despite the coronavirus demand destroyer. The US says deaths could rise to 100K to 240K from the viurus. Nevertheless, the USD moves higher with the JPY on it's tail.  The AUD is just behind the CAD as the weakest of the majors. 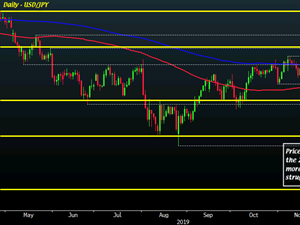 USD/JPY remains in a tug of war battle today 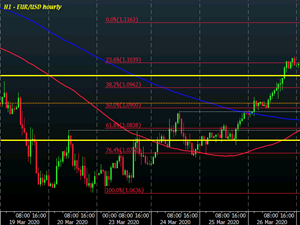 EUR/USD falls to session low, down by 1% on the day now

EUR/USD falls to its lowest level since 26 March as the dollar keeps firmer ForexLive It is all about the dollar and and the yen in the major currencies space, as both currencies are keeping firmer on the day amid the softer risk mood in the market. 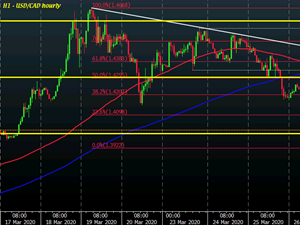 USD/CAD works its way back above 1.4200 as dollar continues to firm

USD/CAD making its way back towards the 200-hour moving average ForexLive Amid quarter-end flows and what not yesterday, the pair had a wild session as price moved above 1.4300 only to come crashing down back towards the 1.4000 level. 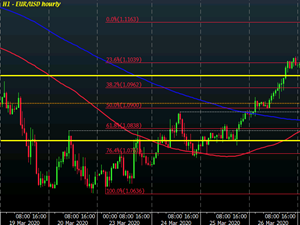 EUR/USD eases back under 1.1000 to start the session, what levels to look out for today?

EUR/USD eases lower as the dollar keeps firmer ForexLive The pair hit a low of 1.0927 in trading yesterday before bouncing back to keep a daily close above the 1.1000 handle. As the dollar firms once again today, the pair is seeing a move back lower below the figure level to session lows of 1.0986 currently. 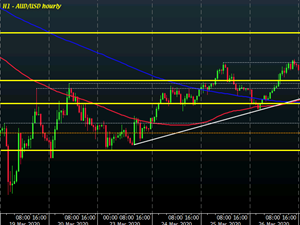 AUD/USD starts to take a peek below key near-term levels ForexLive The dollar and yen are leading gains in the currencies space, while the aussie just extended losses on the day to fall by nearly 1% now against the greenback.

Dow & S&P worst month since 2008. S&P falls -20% for the quarter. All indices are in the red going back a year.  The US stocks are ending the day with declines across the board but by differing degrees.