As the North American session comes to a close, the USD is ending the day as the weakest of the major currencies. In reality it is tied with the neighbors from the north, the Canadian dollar with both showing cumulative declines exactly the same (vs the major currencies).  The NZD was the strongest today.  Although the US dollar is the weakest, the greenback did see some buying into the close.

Catalysts for the weaker dollar seemed to be on risk-on demand, and flows out of the safe-haven USD.  There may also be some weakness ahead of the FOMC rate decision on Wednesday. The Fed will officially announce the new inflation averaging targeting that Chair Powell introduced at the Jackson Hole virtual summit. The net effect is that the Fed will likely stay on hold longer than even previously thought. There were no economic releases today in the US or Canada. 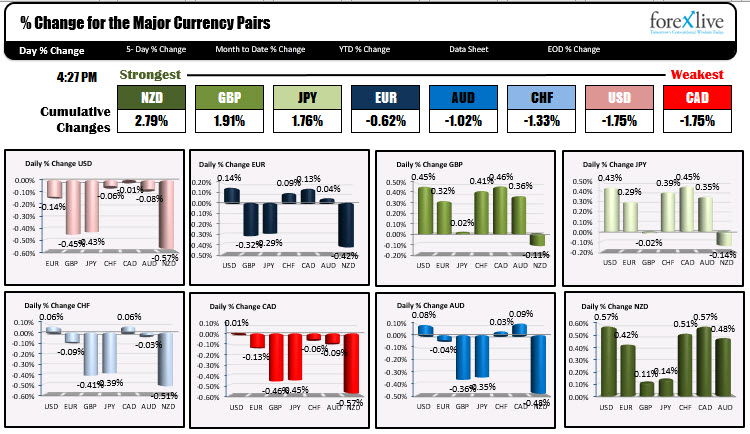 In the US debt market, yields are modestly higher with the 5 year yield up 1.1 basis points. This week, the US treasury will auction off $22 billion of 20 year bonds bonds tomorrow at 1 PM ET p.m.

In the US equity market today, the US stocks rebounded to start the week. The major indices are trying to break a 2 week losing streak and got off to a good start today. The NASDAQ index led the gainers with a 1.87% increase. Below are the summaries for the North American and European major stock indices. The France's CAC led the way in Europe with a 0.35% gain.

Technically speaking for some of the major currency pairs as we head into the new trading day: