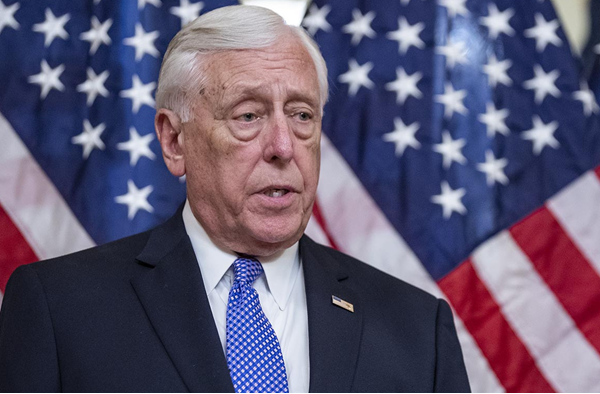 Moderate Democrats met with House Dem leaders in Pelosi's office for an hour and 15 minutes, and afterward they were was high expectation the vote on the Senate's infrastructure bill would still occur on Monday. "I'm bringing the bill to the floor on Monday," Hoyer told us

Pelosi hinted that she doesn't have the votes to pass it earlier today. Left-leaning Democrats don't want to agree to this until there's an agreement on a larger reconciliation bill. It's tough to guess who backs down here but there could be a failed vote on Monday.
Earlier, the same reporter had this:

[Democratic Congressman] Pramila Jayapal told me at least 50 of her progressive members still plan to vote to sink the infrastructure bill if it goes forward Monday. She added that leadership taking some steps to move ahead on the big reconciliation bill is "not enough."
"I don't think the speaker is going to bring a bill to the floor that's going to fail. We have at least 50 people who are not going to vote for the bill. What we need is to take the temperature down a little bit .... The vote is going to drive up tensions not drive down tensions."

A failed vote could cause some turmoil in markets on Monday.
I tend to see that as an opportunity to buy some kind of dip because you know it's going to get done eventually, just like the debt ceiling.
Invest in yourself. See our forex education hub.