Bitcoin gains have faded today after an incredible run that's seen the price nearly double since April 1.
The high today was $8331 and that was a cue for some technical profit taking because it was near the July 2018 high of $8480. Since then, Bitcoin has given back nearly $400 of gains and is down to $7963. 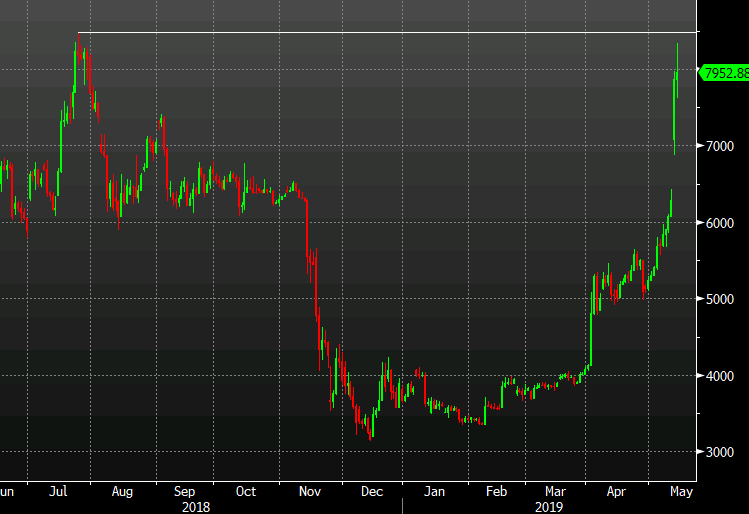 I don't think a bit of selling here would be negative. Simple technical indicators are extremely overbought. The 14-day RSI is at 89, which is comparable to 92 when it was hitting all time highs in a parabolic move.
What's more interesting than the technicals is the buzz. Bitcoin is back on the tip of everyone's tongue and the true-believers may start to believe a bit more.
What's changed in the past six weeks is more clarity on Bitfinex and Tether. There are clearly some accounting and disclosure problems but it's not an outright scam -- they have the tether money, even if they lent some to Bitfinex. It's not a great look but evidently it's good enough. I saw it initially as a move into Bitcoin as a step to move exchanges and get into cash but people are seeing the price of Bitcoin rising and holding on.
The next question is whether the latest rise will be enough to get the generalists back involved. My guess is that it won't be but $10,000 is a big shiny number that could change things in a hurry and start the mania all over again.