HSBC on the Australian dollar and the RBA minutes (December meeting, out yesterday)

That's from an overnight note from the bank (bolding mine).
HSBC hitting the nail on the head here (mixed metaphors mine also). We've been going on and on about slow wage growth for months now. The point is its impact on consumer spending (it serves to keep it restrained) and thus economic growth. Especially when combined with high levels of household debt ... money going to service dent is not sopent on discretionary items.
--
its been a torrid year for the Reserve Bank of Australia .... not: 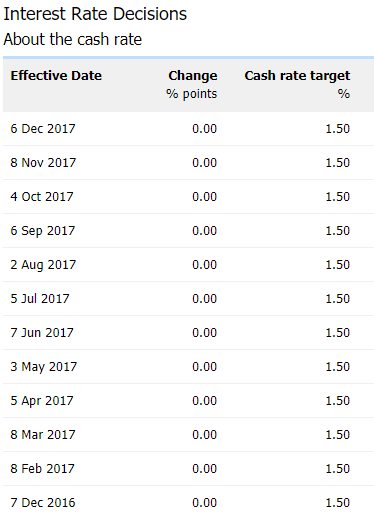 ;-)
The last change (quarter percentage point cut) to the cash rate was at the August 2016 meeting.