All eyes are on the sideshow at GameStop once again today. It hit $365 overnight before falling back to $236, which is still much higher than yesterday's close at $147. 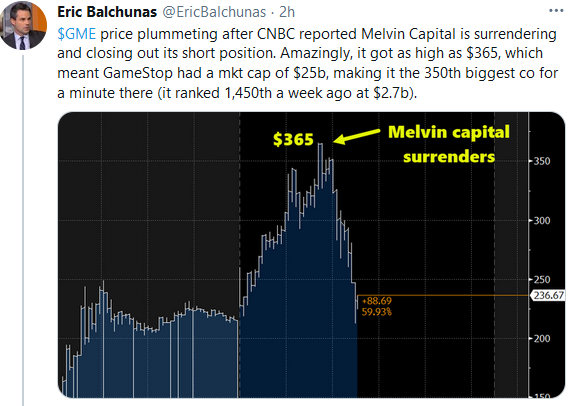 The other meme stock that's running today is theatre-operator AMC, whose shares are up 400% in the premarket at $20.48 from $4.98. That should be a wild ride today.
The less-sexy stock is Microsoft though but it's much more telling for the broader market. The tech giant absolutely crushed earnings in every way late yesterday and jumped to $247 post-market from $232 at the close. However it's since slipped back to $236, up only marginally on the day.
There are a number of stocks have have beat earnings so far this month only to fall back. Even NFLX, which completely crushed it, peaked the day after earnings and has been sliding (and sliding further premarket).
The noise is the meme stocks but the signal is that great companies that are reporting great earnings can't get any traction.
Other examples today:
That's a whole bunch of 'sell-the-fact' and the S&P 500 is set to open 37 points lower after a 6 point decline yesterday.